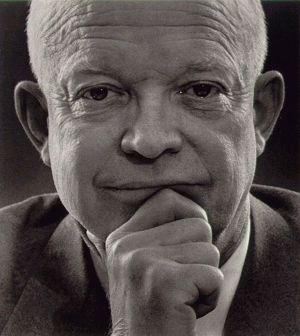 Despite the firepower in this Principals’ Meeting — there are other approaches the Obama team should consider.
General McChrystal’s views are known. Joe Biden’s alternative take on the Afghanistan situation is known.
However, what would be good for the President and the country is to have their views and a number of other serious approaches floated and thought through systematically — much the way that President Dwight Eisenhower did when coming into the Presidency in what was called the “Solarium Exercise.”
Eisenhower came in to office with a bunch of Republican hawks like John Foster Dulles and Curtis LeMay in his national security apparatus — and the general view that Ike’s advisers had was that “containment” of the Soviet Union as articulated by George Kennan and adopted by Harry Truman was a hybrid of weakness and appeasement.
Eisenhower, however, was more cautious and circumspect than his team.
Ike ordered a five week review of policy — assigning three teams with very different perspectives on how to deal with the Soviet threat — and compelled them to work through a total systems analysis of the long term costs and consequences of the policies each team proposed. In other words, they had to pay for their world views — and had to put on the table the back end consequences of their actions.
In the end, Eisenhower presided over a session during which the three groups offered their findings before 80 national security officials, generals, and various policy advisers to the President. This meeting was classified for decades.
In the end, Eisenhower chose to continue a “containment strategy” — but got in the open the policy alternatives to that and educated his entire team about the benefits and negatives of each approach.
Obama would be wise to consider a similar approach.
— Steve Clemons

LIVE STREAM: What Does Europe Expect From Obama At Copenhagen?
Rapprochement, Not “Engagement + Threats” Must Be Tried With Iran

42 comments on “On Afghanistan, Obama Should Take Page Out of Eisenhower Book”