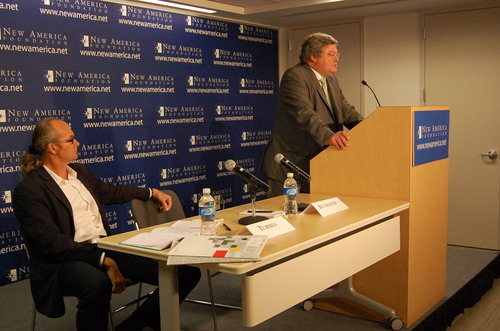 As my colleague Oliver Lough wrote on this blog yesterday, climate change is one of the foreign policy issues on which Europe has led the way for some time now. Try as they might, it has been difficult for Europeans to get their American friends to follow suit.
To discuss the state of global climate change negotiations and the role of the Copenhagen Climate Conference in December, the New America Foundation/American Strategy Program will host an event TODAY, Wednesday, September 30 from 3:30pm – 5:00pm.
The event will feature German Green Party Members of the European Parliament Reinhard BÃƒÂ¼tikofer and Claude Turmes.
Steve Clemons will moderate the forum, which will STREAM LIVE here at The Washington Note.
— Ben Katcher

11 comments on “LIVE STREAM: What Does Europe Expect From Obama At Copenhagen?”