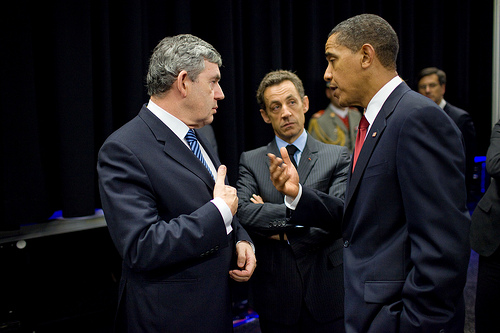 (Photo Credit: White House Photostream)
While at home in Boston this past weekend, I found myself google-news-ing (is that a word yet?) Flynt Leverett and Hillary Mann Leverett to get their take on the Obama administration’s recent moves with regard to Iran and last week’s revelations concerning the uranium enrichment facility near the holy city of Qum.
I expected the Leveretts to offer an alternative to the familiar “carrots and sticks” policy – and I was not disappointed.
In today’s New York Times, the Leveretts take direct aim at the Obama administration’s Iran policy – which they view for the most part as a continuation of the Bush administration’s policy.
As the Leveretts have argued in the past and in detail, the chief goal of the United States with regard to Iran should be a strategic rapprochement a la Nixon’s trip to China.
Here are the key graphs from today’s piece:

Absent some agreement with Washington on its long-term goals, Iran’s national security strategy will continue emphasizing “asymmetric” defense against perceived American encirclement. Over several years, officials in both the reformist government of Mohammad Khatami and the conservative Ahmadinejad administration have told us that this defensive strategy includes cultivating ties to political forces and militias in other states in the region, developing Iran’s missile capacity (as underscored by this weekend’s tests of medium-range missiles), and pushing the limits of Tehran’s nonproliferation obligations to the point where it would be seen as having the ability and ingredients to make fission weapons. It seems hardly a coincidence that Iran is accused of having started the Qum lab in 2005 — precisely when Tehran had concluded that suspending enrichment had failed to diminish American hostility.
American officials tend to play down Iranian concerns about American intentions, citing public messages from President Obama to Ayatollah Ali Khamenei, Iran’s supreme leader, as proof of the administration’s diplomatic seriousness. But Tehran saw these messages as attempts to circumvent Iran’s president — another iteration, in a pattern dating from Ronald Reagan’s Iran-Contra scandal, of American administrations trying to create channels to Iranian “moderates” rather than dealing with the Islamic Republic as a system. President Ahmadinejad underscored this point to us by noting that Mr. Obama never responded to his congratulatory letter after the 2008 United States election — which, he emphasized, was “unprecedented” and “not easy to get done” in Iran.
The Obama administration’s lack of diplomatic seriousness goes beyond clumsy tactics; it reflects an inadequate understanding of the strategic necessity of constructive American-Iranian relations. If an American president believed that such a relationship was profoundly in our national interests — as President Richard Nixon judged a diplomatic opening to China — he would demonstrate acceptance of the Islamic Republic, even as problematic Iranian behavior continued in the near term.

While the Obama administration has offered to talk to the Iranians, the past week’s events suggest that its goal remains the same: to treat Iran as an adversary and use carrots and sticks to influence its behavior. The problem with this approach is that it hasn’t worked and is a recipe for endless conflict.
The Leveretts are advocating that the Obama administration set in motion a different strategy.
In their own words:

INSTEAD of pushing the falsehood that sanctions will give America leverage in Iranian decision-making — a strategy that will end either in frustration or war — the administration should seek a strategic realignment with Iran as thoroughgoing as that effected by Nixon with China. This would require Washington to take steps, up front, to assure Tehran that rapprochement would serve Iran’s strategic needs.
On that basis, America and Iran would forge a comprehensive framework for security as well as economic cooperation — something that Washington has never allowed the five-plus-one group to propose. Within that framework, the international community would work with Iran to develop its civil nuclear program, including fuel cycle activities on Iranian soil, in a transparent manner rather than demanding that Tehran prove a negative — that it’s not developing weapons. A cooperative approach would not demonize Iran for political relationships with Hamas and Hezbollah, but would elicit Tehran’s commitment to work toward peaceful resolutions of regional conflicts.

In my view, the Leveretts have contributed to the policy discourse by providing an alternative strategy, when most everyone else in Washington has been arguing over tactical decisions like whether or not to “engage” (i.e. talk to) Iran.
Daniel Drezner obviously does not agree – and while I am sure the Leveretts could respond much more articulately than I can, I’m going to give it a shot. I want to be clear that I haven’t discussed their article or this post with them, so the views below are entirely my own.
My aim below is to directly counter six points made by Drezner in his post at ForeignPolicy.com.
First, Drezner criticizes the Leveretts for pointing out back in June during the Iranian election controversy what has undoubtedly been proven true – that the regime would survive, American interests vis-a-vis Iran would not change, and the Obama administration should not let the election controversy get in the way of striking a game-changing deal with the Islamic Republic. While the article’s title (Ahmadinejad won. Get over it) may have been unfortunate, the key arguments are sound.
Second, Drezner faults the Leveretts for citing Iranian officials while concluding that the Iranians will not concede to demands that they halt their nuclear program if such demands are made at the “five plus one” talks this week. Putting aside the issue of whether to believe the Iranian officials or not, does Drezner doubt the Leveretts key claim that the Iranians are not going to bow to an American ultimatum? The historical record certainly suggests that they will not.
Third, Drezner takes issue with the Leveretts’ contention that the Obama administration must deal directly with President Ahmadinejad. While one can quibble with exactly who the United States should talk to inside the Iranian regime, the Leveretts’ point must be understood in its larger context. The key is that engagement needs to be about constructing a better relationship, rather than merely offering carrots, wielding sticks, and delivering public speeches. It is sensible that Washington should respect Iran’s institutions as part of an effort to engineer a positive relationship.
Fourth, Drezner mischaracterizes the Leveretts’ fundamental assertion with regard to the Iranian elections. Their point is not that the Obama administration used the elections to try to topple the regime. The point is that the elections are not a game-changer when it comes to U.S.-Iranian relations. Instead of honestly addressing this argument, Drezner tries to take the Leveretts’ use of the term “regime-toppling” out of context. They certainly do not assert, as Drezner insinuates they do, that the Obama administration “fomented” regime-toppling instability in the aftermath of the elections.
Fifth, Drezner says that if the United States can garner support from China and Russia for debilitating sanctions, then Iran might capitulate on its nuclear program. But this ignores the extreme likelihood that China and Russia will not go along with crippling sanctions. It also ignores the fact that sanctions rarely work as a means of changing state behavior. Iran is an enormously important country and will find its patrons.
Sixth, Drezner says that “What the Leveretts seem to be proposing is a multilateral move to bring Iran in from the cold — which benefits Russia and China far more than it benefits the United States. In other words, I’m not sure how a Nixon strategy works in the P5 + 1 framework.”
This last point is wrong for two more reasons. First, ending Iran’s isolation in the context of better relations with Washington would bring enormous benefits to the United States. We, after all, are the ones with allies and security commitments in the Middle East – not to mention all of that oil and gas. Second, Drezner questions how this strategy would work in the P5 + 1 framework. But the P5 + 1 framework is not the Leveretts’ idea – and they have long argued for a bilateral agreement.
Continuing down the road of isolation and threats paved by the Bush administration will not get our relations with Iran to a place where we want them to be. Difficult as it would be to pull off, at least the Leveretts are offering an alternative.
Even if the Iranians were to give up their nuclear program at our behest – a possibility that appears extremely unlikely – we will still find ourselves enemies with perhaps the most powerful country in the Middle East. One way or another, this will eventually lead to war.
Contrary to what Drezner and others are saying, it is rapprochement, not “engagement plus threats” that must be tried.
— Ben Katcher

On Afghanistan, Obama Should Take Page Out of Eisenhower Book
Reflections on the German Elections

104 comments on “Rapprochement, Not “Engagement + Threats” Must Be Tried With Iran”