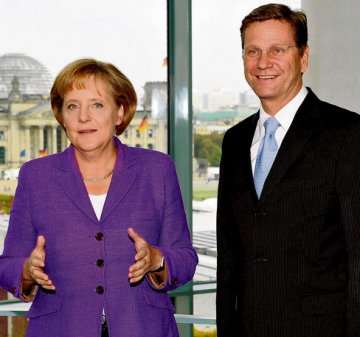 Sam Sherraden just returned from Berlin where he was on a study tour with the Friedrich Naumann Foundation, a think tank associated with Germany’s Free Democratic Party (FDP).
The Free Democrats (FDP) and the Christian Democrats (CDU) put together enough votes in Sunday’s national election to form Germany’s next coalition government. Since 2005, Germany was awkwardly governed by a “grand coalition” of the somewhat directionless Social Democratic Party (SPD) and the CDU led by Angela Merkel.
On Sunday, German voters showed their displeasure with the grand coalition by abandoning the SPD for other parties, or by simply staying at home on election day. An estimated 1.6 million SPD voters simply didn’t show up to vote. The results were devastating for the party, which received fewer than a quarter of the votes, the worst result in SPD history. CDU, the other partner in the grand coalition, took a small hit and received 33.8% of the votes, 1.4% less than in 2005.
Germany was once a three party system, dominated by the SPD and the CDU. But recently, voters have moved away from the center and toward the left and the right. On the right, the FDP received 14.6% of the vote, 4.8% more than in 2005. The Left party received 12% of the vote, a 3.3% increase since 2005. The Greens also improved, receiving 10.7% of the vote, a 2.6% increase.
With the growing support of the FDP and its party chairman, Guido Westerwelle, Merkel will now be able to form her preferred CDU/FDP coalition government. On election night Merkel smiled from ear to ear at the prospects of the new coalition. The next day one headline in a German newspaper read, “FDP Saves Chancellor Merkel.”
Merkel’s new partners agree more with her politics, but the new coalition will unlikely lead to an overhaul of German policy. Much of the electorate remains to the left and parties like Die Linke, the Left, and the Greens are gaining popularity. While the economy finds its footing, it will be difficult for Merkel and Westerwelle to dramatically change course. This would also be contrary to Chancellor Merkel’s leadership style, which is defined by continuity and stability.
One reform that the FDP must deliver is a tax cut. Before the election, one FDP official told me that his party would not enter a coaltion government that did not include a plan to cut taxes. While taxes are important to the German electorate, only 19% of those who were polled thought the FDP had a good tax plan. This will make tax reform difficult, particularly at a time when deficits are high. The FDP may agree to a plan to cut taxes in 2011 by combining it with cuts to social programs. This would allow the FDP to fulfill their election promise and would give them a boost before the election in four years.
While the FDP campaign focused on taxes, the public is most concerned with jobs, the economy, and education.
On employment, the new coalition has reason to worry. Germany’s export-dependent economy will find it difficult to increase employment when the world struggles to create sustainable demand. Many also speculate that large German companies were under political pressure to avoid layoffs until after the election. This could create a post-election unemployment hangover that will make life difficult for the CDU/FDP coalition. The previous government also passed a measure to provide part-time employees full-time wages. If demand does not pick up, this program will come under pressure and some of the 1.3 million Germans enrolled in it may find themselves without a full-time income.
The major challenge for the center-right coalition will be to achieve a post-stimulus economy that gets back to exporting goods and creating jobs. The major threat will be weak foreign demand. Merkel and Westerwelle have little control over this, but regardless they will have to field criticisms from a growing group of parties on the left to keep their coalition together and build a case for their free-market platform.
— Sam Sherraden

Rapprochement, Not “Engagement + Threats” Must Be Tried With Iran
Guest Post by Oliver Lough: Climate Change — Europe Needs Its Leading Lady Back

14 comments on “Reflections on the German Elections”