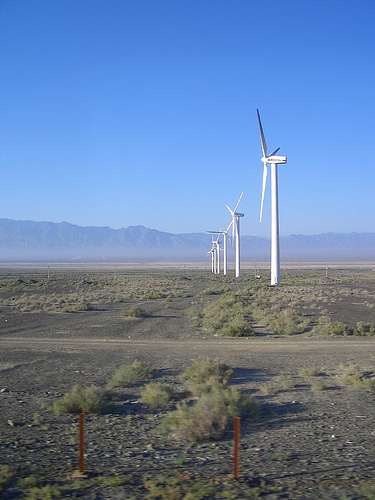 Oliver Lough is a research intern at the New America Foundation.
Perhaps unsurprisingly, months of faintly superior-sounding European criticism of American intransigence on climate change has started to ruffle a few feathers. “It may be,” retorts an exasperated U.S. Special Envoy for Climate Change Todd Stern, “that some people on the other side of the pond don’t understand the system that well.” This is unfair. European politicians are well aware of the intricacies of the “system”, and it scares the living daylights out of them.
The source of much of this pressure from “the other side of the pond” is a slightly contradictory mix of political showboating and genuine concern. The E.U. is extremely pleased with what it sees as its shining record of climate change leadership – instrumental in driving through the Kyoto treaty, Europe is now seeking to blaze a path for others to follow towards the climate change summit at Copenhagen this December.
So far, its commitments are impressive, with a unilateral pledge to reduce its emissions to 20% below 1990 levels by 2020 topped with an annual Ã¢â€šÂ¬15 billion mitigation package to help developing countries de-carbonize their economies.
The lack of action by anyone else on the issue has allowed the E.U. a rare opportunity to don its superpower cap, and it has done so with all the relish of a theatrical understudy determined to make the most of a big break. But behind the smug tone of the regular swipes at “our dear American friends,” there is a real and growing worry that hitherto promising US efforts to make up lost ground on the environment could end up going the way of the public option once they finally hit the Senate.
Despite its triumphalism, Europe knows that its ‘success’ is largely illusory, crafted at a time when the US was not even present at the negotiating table. It’s been a good run, but at the end of the day it simply does not possess the necessary clout to galvanize the trust and commitment of developing big hitters like China and India in any meaningful way. What the Europeans (and everyone else) desperately need is US leadership.
Over the past year, E.U. policy makers have been casting about for a strategy which would help the US to assume some kind of leadership role while allowing it steer momentarily away from some of the thornier issues it faces.
Recognizing the fact that a substantial reduction in emissions could well over-stretch a US administration starting off at an 8-year disadvantage, the E.U. is starting to shift towards squeezing America for a major financial commitment on the issue of mitigation – placed by some at something in the region of $40 billion a year.
Stern has already sought to head off potential critics of mitigation schemes off at the pass, reminding the Senate that these payments to the developing world are absolutely “not charity.”
But as NYT columnist Paul Krugman notes, with certain Senators already deriding mitigation proposals as little more than a “massive wealth transfer,” we could be in for another bumpy ride.
All this and more will be discussed at the New America Foundation‘s upcoming event: What Does Europe Expect From Obama at Copenhagen? The event will feature presentations by European Union parliamentarians Reinhard BÃƒÂ¼tikofer and Claude Turmes.
This event will take place tomorrow, Wednesday September 30 from 3:30pm – 5:00pm and will stream live here at The Washington Note.
— Oliver Lough