When darkness had descended all across the land
A lone voice in the distance uttered Yes! We Can!
He gave good speeches. Never Sweat.
He was real good at the Internets.
He’s Barack Obama
He’s come to save the day!
He passed a major stimulus for the bourgeois.
Then said he’d half the deficit — He He! Ha Ha! 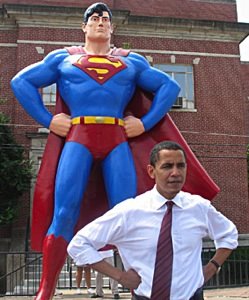 Stop unemployment! Market Dives!
Fix healthcare in his spare time!
He’s Barack Obama
He’s come to save the day!
He’ll use his superpowers to win in Iraq.
Then Kung Fu Chop the Taliban — Ka-Chow! Ka-Cha!
Our image in the world he’ll mend
Then make the Jews and Arabs friends
He’s Barack Obama
He’s come to save the day!
Sir….We’ve got a situation. . .
Pirates! Boom. . .Thud. . .Splat
He’ll spend the dough! Write the checks! Disregard the mounting debt!
Stop the globe from getting warm! Fuel your car with nuts and corn!
Leap a building! Run Industry! Save a kitten from a tree!
Fix the schools! Go to Space! Punch a robot in the face!
Stop a train! Wrestle bears! Smoke a butt! We don’t care —
Cuz You’re Barack Obama
You’ve come to save the day!
So just snap your fingers and fix the USA!

Seriously though, a mystery was solved last night when Barack Obama was asked on stage whether the pic of him standing in front of Superman was real or doctored. He said, “real.”
— Steve Clemons

Foreign Embassies in Iran Taking in Injured?
Dying in Tehran

9 comments on “Some Humor: He’s Barack Obama and He’s Come to Save the Day!”