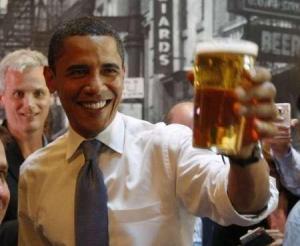 President Obama is going to help mend the rift between African-Americans who have experienced a life of racial-profiling and misunderstood policemen with an early evening White House therapy session involving beer consumption.
According to this report, Henry Louis Gates has ordered “Red Stripe”. Cambride, Massachusetts police sergeant James Crowley will have “Blue Moon”. Barack Obama wants a “Bud Light”.
Bud Light?
After reading Richard Wolffe’s interesting, Obama-instigated and approved book Renegade: The Making of an American President, Obama really comes off as someone preferring a fine pinot noir.
Wolffe quotes political commentator and analyst Ronald Brownstein, now with National Journal and the Atlantic Monthly, on his observation that during the campaign slugfest between Obama and Hillary Clinton, Obama was following a “wine track” strategy to attract supporters and Clinton was on a “beer track”.
While they are swilling beer this evening and patching things up between cops and those on the fickle edge of police enforcement, I have a complicated evening involving wine, beer, and perhaps some fruity cocktails.
I’ll be at the National Geographic Society event featuring Philippines President Gloria Macapagal Arroyo speaking about conservation and preservation efforts in the Coral Triangle. I plan to have Diet Coke there.
Then I will be dropping by the Singapore Embassy to pay respects to Singapore Ambassador Chan Heng Chee at a party celebrating the 44th Anniversary of the founding of the Republic of Singapore. I’ll have a fruity something there. Maybe a Singapore sling.
Then, I am going to the home of Australia Ambassador to the US Dennis Richardson who is throwing what probably will be the best party in DC tonight for the members of the Australian-American Leadership Dialogue. No question — Dennis will make sure I am having a great Australian beer.
And then, I am going to the home of Yemen Ambassador to the US Abdulwahab Abdulla Al-Hajjri, an excellent host and friend, for a dinner honoring Martin Indyk who is now acting Vice President and Director of Foreign Studies at the Brookings Institution and former Assistant Secretary of State for Near Eastern Affairs. I assume the “acting” part of Martin’s title will be retired fairly quickly.
I never know what I’m going to have at Abdulwahab’s home. It’s always something of Yemeni origin and has a cultural significance that the Ambassador explicates during the dinner. What I drink there will be the most memorable — no matter what I have before.
But best of luck to Skip Gates and to Sgt. Crowley in teaching all of us how to be a bit better to each other than we normally are.
— Steve Clemons

15 comments on “Obama likes Bud Light!? What are YOU Drinking Tonight?”