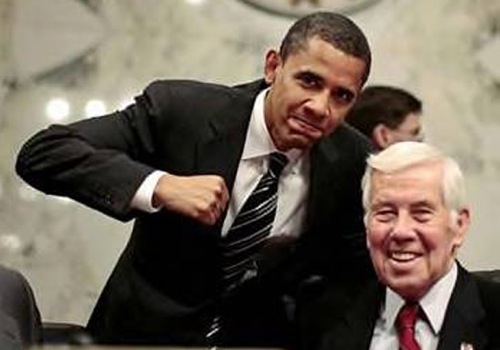 Jackie Northam, national security correspondent for NPR, has a great piece up on Senator Richard Lugar’s moves on US-Cuba relations that will air this evening.
But here is the beginning of the “text” that can be read in full as well. But the opener:

The senior Republican on the Senate Foreign Relations Committee says U.S. policy toward Cuba has not worked to bring democracy to the island and he is recommending an overhaul.
In a report due to be distributed this week, Sen. Richard Lugar (R-IN) says recent leadership changes in both countries have created an opportunity to rethink a complicated relationship, which he says is marked by misunderstanding and suspicion.
One of the key policy overhauls Lugar’s report calls for is lifting tight restrictions on travel and remittances to Cuba that were imposed by the Bush administration in 2003.
Embargo As Excuse
But Steve Clemons, with the New America Foundation, says Lugar’s report is a sharp indictment of nearly five decades of failure in trying to shift Havana’s behavior through sanctions and embargoes.
“I think the … thing about the Lugar report is he said 47 years of failure, that embargos can work in some cases as they did in apartheid in South Africa, but there’s no one who can look at the U.S.-Cuba relationship and say this has succeeded in any way, shape or form,” Clemons says.
Lugar is not recommending lifting the embargo, but he does say the embargo gives Cuba a convenient “scapegoat” for its economic problems. He notes that the replacement of President Fidel Castro with his brother, Raul, a year ago sparked a new discussion about U.S. policy toward the island.
Clemons says it is a prime moment for the U.S. to redefine its relationship with Cuba.
“You … see in Cuba, I think, a more pragmatic and realist leadership there that seems to be moving forward,” Clemons says.
He says there is also a new leadership in the United States.
“The question is can we take advantage of pivot points in history, or do we stand back and let them go by and do nothing?” Clemons asks.
Changes In Cuba
Carl Meacham, Lugar’s senior staffer, researched and wrote the report. He says there have been some positive developments recently in Cuba. In particular, he notes what he calls “modest reforms” such as allowing citizens to be able to own cell phones and computers and stay at hotels previously reserved for foreigners — though the vast majority of the population can’t afford to take advantage of these reforms.
“These changes shouldn’t be mistaken as being structural reforms, that they really have not changed the way the government works in Cuba,” Meacham says. “Nevertheless, they’re working on the edges a little bit because people are dissatisfied, mainly with economic issues.”

This is real progress. Republican Senator Mel Martinez (R-FL) is a naysayer using an old smattering of “evil regime” stuff to argue against change.
I’d really love someone to send me a note if they have Senator Martinez’s travel outside the United States to other countries.
What other “evil regimes” may Senator Martinez have ventured into if he wants to preempt national interest-driven terms of engagement with Cuba?
— Steve Clemons