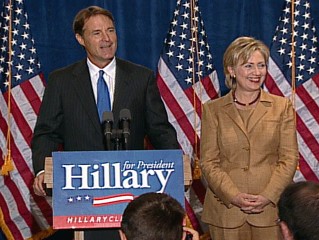 Rumors are flying that tomorrow in Indiana, Barack Obama is going to name Senator Evan Bayh (D-IN) as his running mate.
Bayh denies it — and says that he doesn’t think anything special is being cooked up tomorrow.
This all could be a head fake — or a couple of head fakes. I’m still holding out for some of the other options — or I’d even be up for naming Birch Bayh, Evan’s legislatively successful father. Tom Daschle, Joe Biden, Tim Kaine would all be strong players.
But when I learned that ObamaBayh08.com is now directed to the Democratic Party website, this is pretty good circumstantial evidence that the Bayh fix is in — whether the surprise gets popped tomorrow or not. Bil Browning first turned me on to the website acquisition by the DNC.****(see update below)
None of the other possible VP choices are getting this kind of internet red carpet. As one friend of mine told me, John Kerry’s staff finally figured out he was going for John Edwards as his running mate when someone leaked that painters were stenciling Edwards name on to John Kerry’s airplane just before the announcement.
Reading tea leaves can be promising but has its limits — and still, these could be head fakes.
I can think of a lot of reasons why a Bayh choice is problematic. To some degree, it’s the Dan Quayle play. Evan Bayh is not charismatic. He’s hyper-controlled. When I’ve been with him in meetings or heard speeches by him, I don’t get the sizzle that just emanates from his father who I have had some incredible encounters with over the last year. Birch Bayh is someone every American should know much more about. He’s a true national hero for his work on gender rights, Title VI, and other legislative successes.
But on the other hand, what is really good about Bayh in Obama’s eyes is that he’s not charismatic. He’s controlled. He’s organized and blandly effective and won’t grimace at attending funerals.
Seriously though, the biggest plus is that he would have been Hillary Clinton’s choice — and if Obama is not going to run with Hillary, then picking Bayh is the next best thing at offering an olive branch to the Clintonistas. Bayh is from a midwest state — and may help with red state independents and white working class Dems who are still skiddish about Obama.
Party unity is important, and picking Bayh will help move that ball forward. In addition, just picking someone, anyone, will give Obama a bit of a bounce.
But he’s also bouncing a bit already. Today, he’s up 4 points over McCain in the Gallup daily tracking poll after being tied neck and neck last week. In an AP/Ipsos poll, Obama is actually up 6 points.
And at the fun and invaluable Intrade, Obama’s closing price was 59.8 while McCain closed at 37.
Obama-Bayh. . .Obama-Bayh. . .Obama-Bayh. . .still trying to get used to it.
And then will it be McCain-Pawlenty?
— Steve Clemons
****Update: TWN reader Ben Rosengart reports in that we’ve been spun! And he might be right. . .part of that head fake strategy. The url of ObamaBayh08.com belongs to an individual in Allston, MA and was registered in May 2007. He may be directing the website to the DNC independently I suppose.