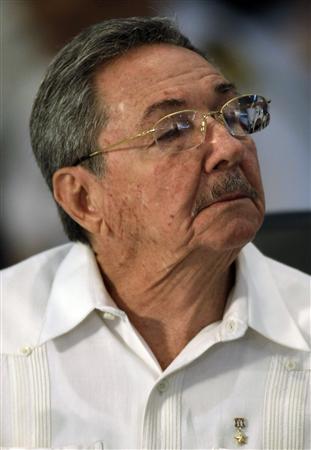 Something big is up in Havana. So big that some are saying that Fidel Castro has finally moved on to the next world — though I don’t believe this to be the case.
Others are saying that they saw Fidel out in public today on an odd shuffling, walk about, flanked by well armed security guards — and a trailing Mercedes.
What has happened is that Raul Castro, now President of Cuba, has sacked his brother’s closest followers and advisers in government.
Both Vice President Carlos Lage and Foreign Minister Felipe Perez Roque have been given pink slips. These were Fidel’s most obvious heir apparents and his chief ideological spear carriers in the next generation of Cuban political leadership.
This is one of those historical pivot points in normally opaque (often Communist) regimes that will be remembered for generations.
Raul Castro seems fully in control now — and he’s done with ideology.
Raul not only demands pragmatism from his team, he wants a government that “works” and which can function with greater efficiency than the past. This is particularly the case given the grim reality that the global economic crisis is hitting Cuba hard — as the price of oil has made Venezuela’s patronage less robust and global tourism to and investment in Cuba have both taken significant hits in recent months.
Ideology is on feeble legs throughout Cuba despite Senator Bob Menendez‘s anachronistic screed on the floor of the Senate this afternoon about Cuba’s governing villains. Menendez today seemed to be pining for the enemies of the past, so the warped politics of anti-Cuba, anti-Castro compulsive obsessiveness could live another day.
But Menendez is behind the times and has been complicit in undermining American national interests with Cuba for far too long — and he and others in Cuba who have strangled opportunity for a new course in US-Cuba relations should pay a political price for for their destructive intransigence. Menendez should go check in with his friends at the formerly right wing Cuban American National Foundation who for the most part think that pols like Menendez, Ileana Ros-Lehtinen, the Diaz-Balart brothers in Congress, and their Democratic Party ally Debbie Wassmerman Schulz went way too far in strangling Cuban-American family emergency travel and financial remittances.
We are at one of those significant punctuation points in Cuban history.
We may be at a real moment of opportunity in US-Cuba relations if Obama’s team of foreign policy hands can find the guts and smarts to realize that it was wrong during the Bush administration for a Cold War with Cuba to actually get colder over the last ten years — and to realize that incrementalism only works in times of historical continuity.
As Brent Scowcroft, Zbigniew Brzezinski, James Baker, David Abshire, Paul Volcker, Thomas Pickering, George Soros, Bill Joy, Jeffrey Sachs, Joseph Stiglitz, Francis Fukuyama, and many others have said — this is a time of significant “historical discontinuity.”
Change is needed and is a smarter, better choice than incrementalism and inertia.
Let’s not see a Foreign Affairs article written this next year titled “Who Lost Cuba?”
Cuba matters a great deal — far beyond its 11 million people and beyond even Latin America. Cuba is the ripest fruit for picking on America’s tree of foreign policy options.
Change there can happen at extremely low cost to the United States. And America’s approach will telegraph much about exactly what kind of America Barack Obama is trying to usher forth in this next phase of restoring U.S. benign moral, economic and political prestige. . .and power.
— Steve Clemons