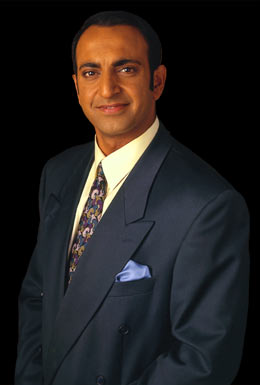 (Riz Khan anchors the Riz Khan Show on Al Jazeera English. This “Note” is part of a series of posts that personalities from Al Jazeera covering the international events in New York and Pittsburgh will be sharing with readers of The Washington Note).
My face saved me.
For once I was grateful. It was quite simple really. I wanted to cross 2nd Avenue to get to the United Nations Headquarters so I could collect my U.N. media pass for the UN General Assembly (UNGA!!) meetings taking place all week.
Security here has been VERY high – far more than previous years, from what I could tell – to the point that it extended one block further than usual into Manhattan. I faced one of those almost comical Catch 22 situations where I couldn’t cross the security barrier because I didn’t have a pass… and I couldn’t get the pass until I was on the other side of the security barrier!
That’s when my face saved me.
From what I could tell, the security guy in the light blue outfit was Swiss. A good sign. At least he was “neutral” in his attitude to me. I had done the usual British equivalent of protesting with Mr. U.N. Security – which largely consisted of asking politely what alternatives I had, and nodding in acquiescence when told there were no real alternatives. Fortunately, the Swiss and Brits share some commonality when it comes to not making a fuss, so when another person – with a valid pass – witnessed what was happening to me, they said to the guard, “He’s Riz Khan – don’t you know him?!”
(I would like to categorically point out that never in my life, have I ever said, “Do you know who I am?” to anyone!)
The guard didn’t seem too phased by the information, but was then at least willing to hear me out a bit more – and then allow me to pass, having established that I was not a threat to security, courtesy of Mr. Valid Pass.
The guard even wished me good luck. I love the Swiss!
I should point out that I had originally tried to get my U.N. pass the evening before – prior to 2nd Avenue being closed off – but balked at the 2-hour-long line at the Media Accreditation tent. I was in no mood to spend two hours in a long line at the end of a long day, having just interviewed the new NATO Secretary-General on my show for Al Jazeera English (which had some great participation from our viewers around the world who sent in questions and called in live during the show).
Pass issues aside, the UNGA week in NY is actually a lot of fun. There’s a buzz in the air. The world is in town – pretty much every world leader, at least… and even the cordoned-off streets, and constant blaring of police sirens create an atmosphere of something special happening in town.
The storylines this week will be plentiful. From Obama’s Israel-Palestine meeting, to Gaddafi’s first ever visit to the US, to the top heads of state sitting down together to tackle climate change, I can only hope that Americans will be fully engaged in the debates and events as they happen this week.
For some reporters, the UNGA is a highlight of their journalistic year – travelling in from some far-flung place to be among the journalistic glitterati, political personae, and somewhat eclectic New Yorkers.
During this week, the streets around the U.N. HQ are filled with an even greater interesting mix of international faces, limos with blacked-out windows, and burly, dark-sunglasses-wearing, cropped-haired security guards with grim expressions.
Looking at them, I don’t feel my face could save me.
Thank goodness for the Swiss!
— Riz Khan

Clinton’s Policy Party Packs Them In (But not Me!)
Putting Lipstick on a Middle East Pig