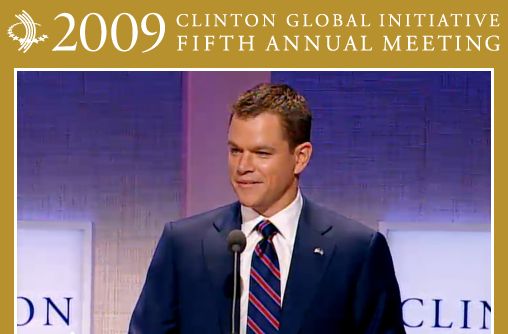 (Matt Damon speaking about expanding the activities of Water.org to Haiti in the opening plenary meeting of the 2009 Clinton Global Initiative.)
Bummer.
I listened to the Clinton Global Initiative media/press volunteers and left my comfortable spot in the press room (that took me two hours to get through the security lines and credentials process to get in) to go upstairs to interview some of the leading Middle East personalities attending this year’s CGI meetings. And then when I ventured back, there was no more room in the inn for Steve Clemons and The Washington Note.
The volunteers are great — but all they could say after I had been misled was, “Shucks, I’m sorry.” He really did say “shucks.”
But the place is packed, and they can’t wave a magic wand and invent seats — but I’m not going to go through this again. Huge waste of time when I can just watch on line. You can too — and the sessions are worth the time. I saw Joe Klein get in — and thought about sneaking in line with his trail. . .but that’s not appropriate at something like this (besides given the armed-to-the-teeth security in NY that Riz Khan references below, don’t want to find myself an accidental statistic).
So, unlike what I wrote before — I am missing the “live session” with Bill Clinton, Kevin Rudd of Australia, President Obama and a fun panel of others — but am watching the session over the web here (but could have done that in Kansas!)
Damn. Watching here — I see I’m missing Matt Damon too. (small surge of anger at self and CGI staff for telling me I didn’t have to worry about getting in)
My hat is still off to President Clinton for investing his time and focus in working to solve many enormous global problems.
This is an impressive assembly — and I’ve seen some of the best international do-gooders in the lobby of the Sheraton here, and I’m in awe of these hard working people helping to leverage resources to give those who don’t have much a chance at something better.
— Steve Clemons

38 comments on “Clinton’s Policy Party Packs Them In (But not Me!)”