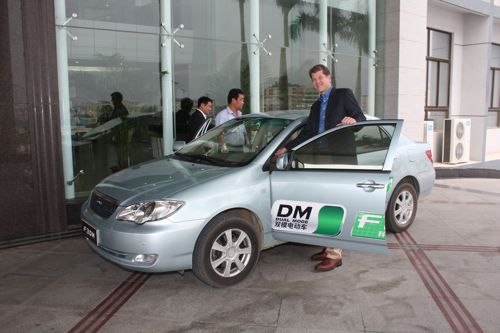 (Washington Note blogger Steve Clemons at BYD Auto Headquarters in Shenzhen, China; photo credit: Peter Pi)
A few months ago, I joined an unusual meeting sponsored in part by the Foundation for the Defense of Democracies.
Don’t have a heart attack (particularly POA), but it included Richard Perle, Clifford May, James Woolsey, Charles Krauthammer and other leading lights of the “next war, please” crowd. This is not the group of Wasingtonians I typically hang out with, but believe it or not, we found common ground.
All of us want to have a federal tax on gasoline that drives the price to levels higher than $4.00 a gallon. At price levels higher than this point, Americans just stop their frivolous driving, highway-related deaths plummet, and the economics of alternative energy development become significantly enhanced.
I think that some of those I mentioned above genuinely want to detach America’s interests from the Middle East — which I don’t think is realistic. On the other hand, I think that there is no climate change remediation strategy that can be shoved on to China or the world when the United States continues to pump out cheap gas and oil to its consumers.
Yesterday at the BYD battery and automotive plant in Shenzhen, China I saw first hand the economic and political cost of America’s cheap energy strategy. Neither the US nor even Japan hold a secure lead in mass market electric car development. 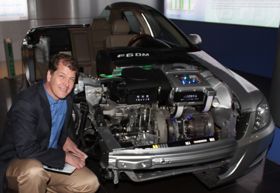 Fisker makes a very expensive, very high end electric car — but in a different strategic approach, battery manufacturing powerhouse BYD has gotten into the mass market car business selling 200,000 cars domestically in China last year and planning this year to sell 400,000 cars. Most of these are small, cheap, efficient gas cars — but BYD has now put out to market the F3, which is an electric hybrid with a one-liter engine that plugs in to the wall socket.
BYD’s E6, however, is the car that reminds me of the 21st century version of the Toyota Corolla — the car that first took advantage of the 1970s energy crisis and clobbered American rivals in the US market.
The E6, which is targeted in xpart for California and plans to launch there in 2011, is fully electric — and has a 400 km/250 mile range and goes up to 160 km/100 miles per hour.
I drove one yesterday, and it’s a great vehicle.
Warren Buffett thinks the same — and is now in the process of buying 10% of the company.
I used to listen to American auto executives say that battery cars would never really be developed, that there would be too much static in the engine, that there would be tort liability issues that would preempt development and production.
Well — surprise, surprise — China now has one that will sell for roughly $22,000 and is preparing for mass market sales.
America is addicted to the narcotic of overly subsidized gas and needs to set up new incentives to develop the energy and transportation technologies that are needed for this next century. We just aren’t doing it — and China is.
Thanks to my hosts at BYD for a peek into the future and the test drive — but to my friends in the Obama administration, America will never really move forward on energy alternatives when we are able to get a quick fix on our current addiction to overly cheap gas.
— Steve Clemons