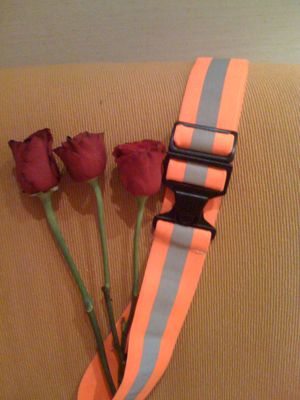 Lieutenant General James Lovelace may only have the safety of his soldiers in mind at Camp Doha — but quite a bunch of these soldiers don’t feel much love for him because of the obsessive compulsion he has to see all of his military lads wear “reflective attire” as they walk from one point to another on the base, inside the security fence.
To be fair, my hunch is that with military vehicles moving around the compound, Lovelace wants his soldiers to stand out and be seen at night. But according to authoritative sources, there can be zero cars out and yet a soldier caught out not wearing his attractive orange reflector belt (as pictured to the left) is up for some big time trouble.
Of course, I wonder if the General has considered that while helping the drivers on base see his soldiers, he’s also helping those just outside of Camp Doha see them too — folks that might see these soldiers as targets.
We have heard rumors that General Lovelace, who may be a great guy, is headed out soon as commander of Camp Doha and will take on a new assignment — and most hope that the next commander will be a little less fixated on making sure that military fashion is accompanied by stylish reflector belts.
I know a lot of folks in the Logan Circle area of DC who would love them though and am making arrangements to arrange some fashion transfers.
— Steve Clemons