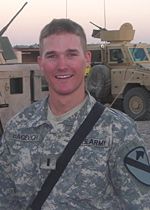 The United States is engaged in too many wars at the same time and is convincing too many other nation states that it cannot achieve the ends it sets out for itself.
The military limits America has exposed in its Iraq and Afghanistan engagements; the moral mistakes the US military and Bush administration made in Bagram, Guantanamo, and Abu Ghraib; and the audacity of American structural corruption that resulted in the export of toxic financial products to the rest of the world have generated doubt in the minds of allies that America can realistically support them — and have animated the ambitions of foes.
North Korea is testing America — just like Joe Biden said would happen.
One of the great thinkers about the implosion of American power in the world is Boston University defense thinker Andrew Bacevich whose book The Limits of Power: The End of American Exceptionalism is a should read.
His son, Andrew Bacevich Jr. (pictured to the left) was killed in Iraq, one of our current wars that I believe has undermined America’s place in the world and its global leverage — not increased it.
But I want to remember Bacevich and the many who have sacrificed for the country. I have friends in the military deployed in the Middle East now — and I wish they were back home. These soldiers do deserve our respect — but like Bacevich Jr.’s father, I believe that our current conflicts are doing the nation great harm.
Memorial Day does not mean embracing wars and conflicts that set back the interests of the nation in some shallow gesture of patriotism — but Memorial Day should mean paying respect to those who have sacrificed greatly for the nation, even if that sacrifice should not have been demanded by our leaders.
— Steve Clemons