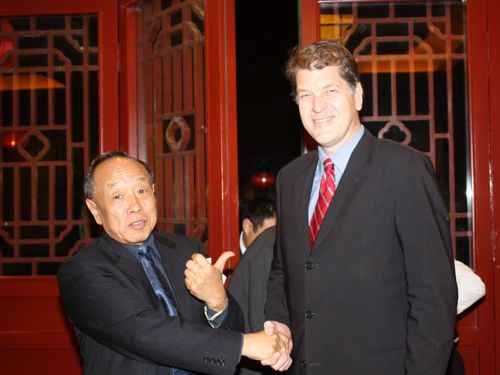 (Former Foreign Minister of China Li Zhaoxing and Washington Note blogger Steve Clemons; photo credit: Peter Pi)
The above picture was taken in Beijing with Li Zhaoxing, who served as former Ambassador of China to the US and then served as China’s Foreign Minister.
Li now serves as Honorary President of the Chinese Peoples’ Institute of Foreign Affairs — and is one of the most fascinating people I have met over here. I may write more about his unique style and perspective on China’s strategic course when I get a bit more time — but it’s pretty interesting to know that he speaks some Swahili and essentially missed the years of the Cultural Revolution serving in China’s Embassy in Kenya — a country that has attracted great interest among Americans because of Barack Obama’s Kenyan lineage.
Today, I’m in Wuxi, a Chinese second tier city in Jiangsu Province about 128 kilometers from Shanghai and 180 kilometers from Nanjing. This afternoon, I fly to Shenzhen down south.
Wuxi is an export powerhouse with about 80 of the Fortune 500 firms based here. I saw many of them yesterday including Astra Zeneca, Coca-Coa, NEC, Mizuho, Accor, Fedex, Sony, Caterpillar, Toyota, Sharp, Itochu, Jabil, Valeo.
But the region has been whacked by the economic crisis with a decline in exports the last quarter of 30% compared to last year.
But get this — Wuxi subsidizes firms to offer retraining packages for their employees if they don’t lay them off. And the region works hard to increase services to manufacturing firms based here to help them through the crisis — and more importantly, to assist workers — both those registered in this province and those who are migrants (i.e. unregistered).
And on top of that, the central government has greenlighted three large scale transportation related projects that it had previously rejected — including the building of Wuxi’s first subway system and a new passenger hub terminal for an express train stop on a line being built both from Shanghai to Nanjing as well as Shanghai to Beijing.
The focus here on keeping people working, on correcting obvious environmental problems, on getting large scale public works infrastructure immediately underway is incredibly impressive — and makes me even more frustrated with the absence of this kind of focus in the U.S.
We talk about jobs, talk about Smart Grid and new express railway systems, talk about public infrastructure, talk about keeping people in their homes — but we seem to do more talking than doing in the United States.
This place is “doing” — and doing so quite impressively at the local level.
— Steve Clemons

25 comments on “China in a Hurry on Jobs and Infrastructure”