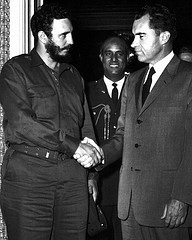 From 12:30 pm – 1:45 pm EST today, The Washington Note will be streaming live a New America Foundation discussion cosponsored with the Nixon Center on what a Nixonian re-do of US-Cuba relations might look like.
I will be moderating a meeting featuring Dimitri Simes, President of the Nixon Center and former Foreign Policy Advisor to Richard Nixon; JULIA SWEIG, Rockefeller Senior Fellow & Director Latin America Studies at the Council on Foreign Relations; FLYNT LEVERETT, Director of the Geopolitics of Energy Initiative at the New America Foundation and former Senior Director for Middle East Affairs, National Security Council; and Col. Lawrence Wilkerson (ret.), former Chief of Staff at the Department of State and Pamela C. Harriman Professor at the College of William & Mary.
From my perspective, the fact that US-Cuba relations are the only place on the planet where the Cold War actually got colder over the last decade — even though Cuba has moved from exporting revolution to exporting doctors means that America’s strategic calculus regarding the island nation should be changing — but isn’t discernibly.
It’s time to seriously review US-Cuba relations not through the prism of America’s domestic political scene — but through the prism of American interests.
— Steve Clemons

8 comments on “STREAMING LIVE TODAY: What Would Nixon Do on Cuba?”