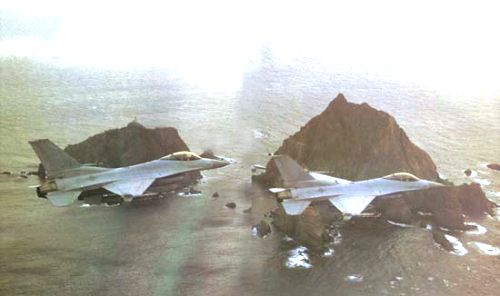 Mindy Kotler is director of Asia Policy Point, a Washington research center that provides objective information on East Asia to the policy community.
Among the many obstacles hindering success at the Six-Party Talks to denuclearlize the Korean peninsula are the ingrained animosities between Japan and South Korea. These tensions are never far below the surface and arise at inopportune times. Recently, another row over a group of rocky islets located roughly halfway between South Korea and Japan threatens to undo U.S. efforts with North Korea.
Both Tokyo and Seoul are armed with all sorts of document and treaty evidence supporting their claims on the islets, which the West calls the Liancourt Rocks, while Korea calls them Dokdo and Japan, Takeshima. These barely habitable rocks are surrounded by waters believed to be rich in fishing and undersea resources. Old maps seem to support both country’s territorial claims, while old documents are more vague. The rocky islets were annexed by Japan along with the Korean Peninsula in 1910, but Tokyo claims its territorial rights to the islets were declared five years before the start of Japanese colonial rule in 1910 and reaffirmed in the1951 San Francisco Peace Treaty.
The reality is that South Korea has stationed a 50-strong police and Coast Guard contingent since 1953 on Dokdo. They have also built a lighthouse and a dock to help reinforce its ownership. Japan is constitutionally barred from trying to take it back.

But, on July 14, just days after the G8 summit where the Prime Minister of Japan Yasuo Fukuda met on the sidelines with President Lee, Japan announced that its education ministry would publish teaching manuals in which the islets are referred to as Japan’s territory. This is on top of the sudden update of the Japan Foreign Ministry’s website description of its claims on the islets exactly one month prior to the April 21st visit of the new Korean President Lee Myung-bak.
South Korea’s reaction was swift and emotional. The South Korean ambassador to Tokyo was recalled, a Japanese proposal to hold bilateral talks at an Asian security forum in Singapore last week was rejected, exchange programs were canceled, and Seoul threatened to send its Marines to defend the islets. Worse, the South Korea’s ambassador to Japan warned that Seoul could withdraw support for Japan in negotiations with North Korea, including those over the “nuclear, missile , and abduction issues” [emphasis added]. For their part, the South Korean public has protested loudly, called their president weak, pulled down Japanese condom advertisements in the subways, and in front of the Japanese embassy in Seoul, decapitated pheasants (Japan’s national bird) to drip their blood on Japanese flags.
Thus, we find that the unresolved sovereignty of near inconsequential territory has South Korea still so insecure with its national status that its leaders are willing to hint they will let the North Koreans keep their nuclear and missile programs. For their part, Japan’s governments express interest in the islets when polling numbers for the ruling party sink, as now, and the organizing power of Japan’s powerful right is needed.
The U.S. alliances with both Japan and South Korea are important. However, the U.S. should not be asked to choose sides or to mediate. But neither should Washington continue its condescending attitude that this issue represents a mere emotional Asian distraction. These views are embedded in Japan’s and Korea’s politic. At some point a mere call for calm may not be enough.
As the new democracies of Asia mature and their civil societies expand, these issues of nation and identity will increase and intensify. The challenge for the US is not just to develop bilateral alliances, but to ensure that our allies work together. At some point Washington will need to make it a condition of American alliances in Asia that they themselves resolve their disagreements. Seoul’s refusal to go to the International Court and Tokyo’s failure to contain its right wing, its ministries, and even local governments (one southern prefecture in 2006 took it upon itself to declare an annual Takeshima Day) is no longer acceptable.
In 2005, then acting Secretary General of the ruling LDP and one of Japan’s most nationalist politicians who in 2006 became prime minister, Shinzo Abe, told an audience at the Brookings Institution:

With regard to the relationship with South Korea, the biggest issue is the Takeshima issue or Dokdo issue, and right now, effectively, Korea is the one who is ruling that island, and Japan is not making any challenge. So Korea is the one who is making all kinds of arguments, and are making it a big issue. So far as Japan keeps calm about this issue, I think it will go away, become calm, later on. Of course I’m not saying that we are not going to claim what is rightfully ours.

This week the South Korea ambassador will finally return to Tokyo. He will bring a letter of protest from his Foreign Ministry and try to talk with Japanese leaders. For now the call for calm is working; that is, until next time.
— Mindy Kotler
THIS JUST IN: On Saturday, July 27th, the US Board on Geographic Names, which characterizes and names various geographic locations for use by U.S. government agencies as well as the American public, made an “update” on how it describes the islets noted above Until Friday, July 26th searching for the term “Liancourt Rocks” on the Board’s official Web site showed a listing of Dokdo as “South Korean” territory. The board has been using the English name Liancourt Rocks to describe the East Sea islets since 1977. Starting on the 27th, however, Liancourt Rocks have been characterized as “undesignated sovereignty”‘ and are no longer described as belonging to South Korea. In addition, the order of alternate names cited online was reversed. Previously, the name Dokdo was at the top of the alternate-names list, placed above Japanese names Takeshima and Take-Shima. Since Saturday the 27th, the Japanese names have moved to the top of the list, above the Korean name Dokdo. Yes, the South Koreans track these sorts of things.

TERRORISM SALON: Eric Rosand on Gaps in the International Framework
STREAMING LIVE TODAY: What Would Nixon Do on Cuba?