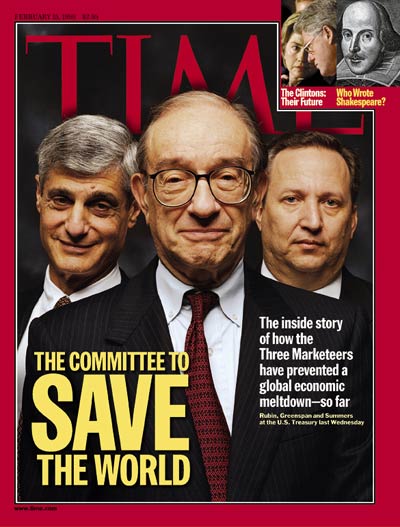 I just ran across some of my notes from a conference organized by the Japan Institute of International Affairs in Hakone, Japan from March 12-13, 1999.
I was about to toss these scribbles until I glanced through them and found so many gems they should probably go to the National Diet archives.
Keep in mind that today the Japanese government announced that its economy had contracted at jaw-dropping annualized pace of 12.7 percent in the three months through December, the worst fall in the past 35 years. How does one treat national hypothermia on such a scale?
I may print and post all of my notes at a later time, but here are some of my March 1999 scribbles:

1. George Soros — has reform ideas — Particularly International Credit Insurance Fund (or Corp). Missing issue — not enough interest in international community to generate real reform. [Soros was not at conference but wrote this at time and was reference at JIIA Conference.]
2. Former Japan Ambassador to the US and JIIA Chairman Nobuo Matsunaga stated: “On U.S. economy — Met Greenspan, who was bullish on U.S. economy, except modest concern about overheated capital markets.” Matsunaga recognizes overwhelming dependence of world growth on U.S. economy.
3. China’s Central Bank Governor — “China will maintain present current value of currency.”
4. Naston (from Indonesia) — a. short term debt build up high — borrowers highly leveraged; b. banking system weak — corrupt — weak oversight structures. . .
5. Koichi Haraguchi — former Deputy Foreign Minister and Ambassador of Japan to the United Nations: “Let’s dscuss an Asian Monetary Fund.”
6. Barbara McDougall — “When it comes to contagion and short-term capital flows, what will the Asian Monetary Fund do that the IMF won’t? What national agendas will be in play?

My notes are extensive, but this is fascinating and captures the collision of perspectives between some leading American economic thinkers and Asian foreign policy and economic elites.
Matsunaga, for instance, saw ten years ago that the world was too dependent on the American economy for growth. China was uninterested in properly adjusting the weight of its currency — a hot topic of debate even a decade ago. George Soros was calling for economic reform back then but couldn’t muster enough support from the international community to pay attention. The Indonesians and Thais reported openly about the lack of oversight of their financial system — and America became like they used to be. Barbara McDougall from Canada didn’t believe that the 1997-98 East Asian Economic Shocks justified any new Asia-directed financial institution building, and the Japanese and most other leading Asian economic thinkers did believe something was necessary.
We know the results today. Asian economies that could built up huge currency reserves as shock absorbers in case of future crises. To some degree, this aggravated an already bad global imbalance of savings and consumption between the American economy and those it did business with in Asia — particularly Japan and China.
I took with me to this conference a 4 March 1999 Financial Times article written by my then boss Clyde Prestowitz, President of the Economic Strategy Institute, titled “The Japan that Can Say Yes.” He wrote:

There have indeed been rumblings on the right from such figures as Shintaro Ishihara, conservative politician and novelist (co-author of The Japan That Can Say No) who argues that the whole economic crisis is nothing more than an American plot to undermine Asia’s heretofore rising influence. But these dissonant tones have not so far resonated with the Japanese public of mainstream policy makers. Nor are they likely to do so.
There has been a long-running debate as to whether the peculiarities of the Japanese economy that came to be characterized as Japan Inc. were cultural and thus largely immutable or matters of policy and convenience that might change to adjust to new circumstances.
Although always questionable from the point of view of long-run economic efficiency as well as international comity, Japan’s adoption of policies that excluded foreign participation in its economy and emphasized national champions in key industries was understandable as part of its attempt to rebuild a national identity and reassert sovereignty in the aftermath of defeat. When these policies succeeded beyond all expectations, they were cloaked in the mantle of culture — thereby giving them an aura of uniqueness and permanency.

What strikes me given Japan’s near term memories of a decade ago — and shocks in the 1970s as well is that it may continue to evolve in new and different directions as it copes with current circumstances.
But as I think about how the US is responding — and how we are building national champion firms and cloaking our national policy decisions in the cloak of culture past and culture yet to come, we are sounding a lot like the Japanese were when they were trying to remain insulated from outside pressures.
The bottom line for me though is that this is deja vu all over again. We saw an over-dependence on the American consumer and American economic growth driving Japanese and Chinese economic behavior — and no one did a thing about it. This is tantamount to global fraud by all of those economic elites in Japan, the U.S, and China. The global imbalances have always mattered, though we have been seduced over the years to believe they did not. Keynes believed structural imbalances were important — but even he has been conveniently reinterpreted or pushed into the closet.
Truth be told, the Chinese have been understandably eager to grow as fast as possible to achieve social transformation. I don’t hold the Chinese as complicit in our current circumstances as I do Bob Rubin, Lawrence Summers, and Alan Greenspan — who were the high priests of the economic order we built and in which Japan played eager geisha.
But today China can’t pretend ignorance and has become complicit — and must do something to save both us and itself. Japan’s financial leaders, in contrast, have understood for a long time that the equation that they had helped construct with American political elites was unhealthy and unsustainable.
— Steve Clemons

8 comments on “On Japan’s Economy: Some Old Scribbles Show What Massive Fraud Has Taken Place Over Last Decade”