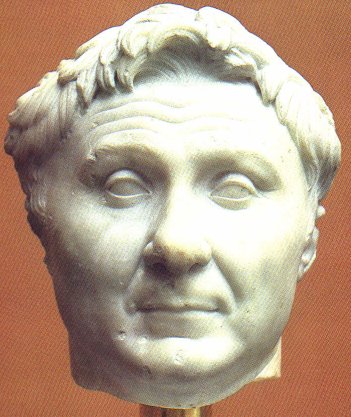 Barack Obama is having America up the ante on its investment in rolling back the Taliban and those who follow them in Afghanistan. We are sending more troops and trainers, and are committing to civil reconstruction programs whose outlines are unclear.
But Obama and his advisers should read this bit on Roman General Pompey’s efforts to deal with the terrorists of the day at the height (and near end) of the Roman republic.
Pompey gave the pirates he quelled an alternative life — and I just don’t see that yet in the rhetoric or strategic game plan that is unfolding for America’s now seven year plus military engagement in Afghanistan.
I first saw this clip on Richard Vague’s Delancey Place:
Terror in Rome
In today’s excerpt — terror in Rome. In 67 BC, Pompey, early in a meteoric career as a Ro
man politician and general that includes conquering the East and joining with Caesar in a Triumvirate to rule Rome, is asked to overcome the pirates that have been terrorizing Rome for decades:

“Capture by pirates had recently become something of an occupational hazard for Roman aristocrats. … However, kidnapping was only a sideline for the pirates. Calculated acts of intimidation ensured that they could extort and rob almost at will, inland as well as at sea. . .
The shadowiness of the pirate’s organization, and their diffuse operations, made them a foe unlike any other. ‘The pirate is not bound by the rules of war, but is the common enemy of everyone,’ Cicero complained. ‘There can be no trusting him, no attempt to bind him with mutually agreed treaties.’ How could such an adversary be pinned down, let alone eradicated? To make the attempt would be to fight against phantoms. ‘It would be an unprecedented war, fought without rules, in a fog’; a war that appeared without promise of an end. . .
“Only once, in 102 BC, had the Romans been provoked into tackling the menace head on. The great orator Marcus Antonius, Cicero’s hero, had been dispatched to Cilicia with an army and a fleet. The pirates had quickly fled their strongholds, Antonius had proclaimed a decisive victory, and the Senate had duly awarded him a triumph. But the pirates had merely regrouped on Crete, and they soon returned to their old haunts, as predatory as before. … Bandits, like their prey, were most likely to be fugitives from the misery of the times, from extortion, warfare, and social breakdown. …
“The pirate’s growing command of the sea enabled them to throttle the shipping lanes. The supply of everything, from slaves to grain, duly dried to a trickle, and Rome began to starve. . .
The grip of famine tightened around Rome. Starving citizens took to the Forum, demanding action on the crises and the appointment of a proconsul to resolve it. … It was a tribune, in 67 BC, who proposed the people’s hero [Pompey] be given a sweeping license to deal with the pirates. … Pompey was granted an unprecedented force of 500 ships and 120,000 men together with the right to levy more, should he decide that they were needed. …
“As it proved, to sweep the seas clear of pirates, storm their last stronghold, and end a menace that had been tormenting the Republic for decades took the new proconsul a mere three months. It was a brilliant victory, a triumph for Pompey himself and an eye-opening demonstration of the reserves of force available to Rome.
Even the Romans themselves appear to have been a little stunned. … Campaigns of terror were containable. Rome remained a superpower.
“Even though Pompey’s victory had demonstrated once again that the Republic could pretty much as it pleased, there was none of the savagery that had been traditionally been used to drive that lesson home. In a display of clemency quite as startling as his victory, Pompey not merely refrained from crucifying his captives, but bought them plots of land and helped set them up as farmers.
Brigandage, he had clearly recognized, was bred of rootlessness and social upheaval. For as long as the Republic was held responsible for these conditions, there would continue to be a hatred of Rome. Yet it hardly needs emphasizing that the rehabilitation of criminals was not standard policy. . .
The town where [Pompey] settled them was titled Pompeiopolis: his mercy and munificence were to contribute eternally to the greatness of his name.”
— Tom Holland, Rubicon: The Last Years of the Roman Republic, Anchor Books, Copyright 2003 by Tom Holland, pp. 164-171.