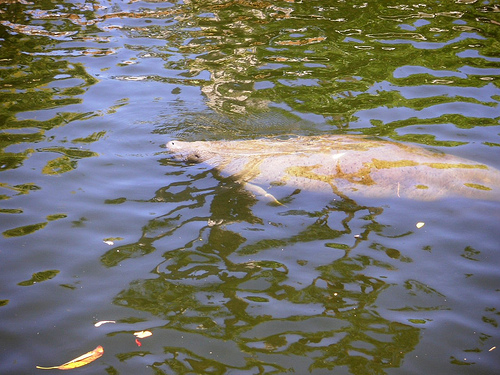 This manatee floated up to the surface in one of the canals in Ft. Lauderdale when I was there a week ago. It was a magnificent creature and stayed with us quite a while — sort of posing.
Maybe since Spring is upon us, I’ve been more tuned into nature than normal. For instance, I have been somewhat obsessed with this huge robin trying to build a nest on my front porch — at the top of a column under the roof’s interior edge.
In fact, I just posted this on my twitter update and on facebook:

Steve thinks there must be an economic policy metaphor somewhere in that a robin is trying hard to unsuccessfully build a nest on his front porch.

Perhaps the best reply on Facebook has thus far come from Michele Wucker who heads the World Policy Institute in New York. She wrote:

at the risk of being super wonkish: let’s break down the reasons why the nest is not working.
Not enough twigs, string, or other construction materials? materials stolen by competitors? immigration raids on undocumented robin construction workers? unstable location? too easily reached by cats? lack of technical skill by said robin? not enough robins to make a Spring? exploding ARM on nest means not enough capital for building?

The real reason the nest is not taking was lack of foundation. The edge the bird wants to live on is just inadequate. I could try and build out the platform a bit — but others in this household don’t want to make those sorts of loans. In the mean time I have a huge mess of really good bird nesting material all over my porch.
Robert Schlesinger of US News & World report writes:

Humph. I wonder if I could make an economic policy metaphor out of the bird that keeps flying into my office window. 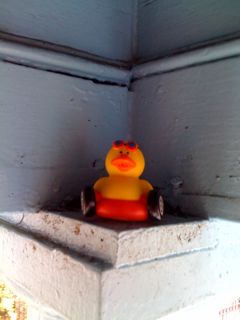 Tony Fleming of InterAction zaps me with:

No, Steve… it’s just a sign of spring (and perhaps that you’re looking for wonk where no wonk exists.) 😉

It’s systemic risk vs. morale hazard. Do we bail out the little robin and help it build it’s nest when we know the little robin shouldn’t have ever qualified for the interest-only mortgage loan in the first place? it’s a bad choice to begin with. How will the little bird ever learn that it’s got to live within it’s means? Who signed into legislation these nest building swaps anyway? And what is Steve’s cut? The public won’t tolerate any more taxpayer funded bonus payouts.

a bird in the nest is worth two on the porch…

That sounds like Walker wants me to build out the platform.
I couldn’t take it anymore — and just put up a smiling yellow rubber duck with sun glasses to encourage the robin to look for opportunity elsewhere.
— Steve Clemons

US-Cuba Policy Change is Coming. . .
Obama Should Read up On How Roman General Pompey Dealt with Terrorists

18 comments on “The Manatee and the Robin”