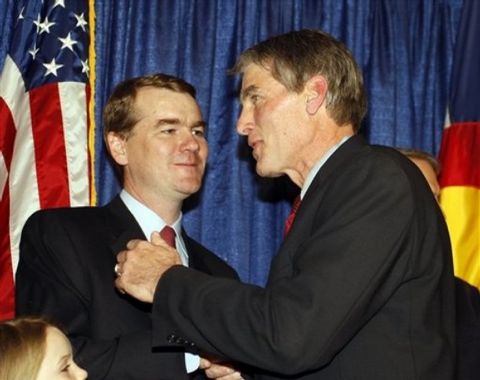 Former US Senator Tim Wirth (D-CO) who for many years has served as president of the United Nations Foundation hosted a very nice welcoming reception at the Metropolitan Club for incoming Colorado Senators Mark Udall and Michael Bennet.
The best back and forth joke of the evening was that Tim Wirth had told both Senators that he had gone to see the Senate historian to make sure that the Udall-Bennet duo was properly noted as the least senior team from any state in US history.
Mark Udall was sworn in with the incoming class of freshman Senators in the 111th Congress. And then Bennet, appointed by Colorado’s governor to succeed new Interior Secretary Ken Salazar, was sworn in five days later.
When Senator Udall spoke, he poked some fun at Tim Wirth — stating that Wirth had slyly gone to plead with Senator Judd Gregg not to resign his seat in favor of becoming Commerce Secretary (Gregg had pulled out of Barack Obama’s Commerce appointment just a couple of hours before) because that would steal from Colorado the record of being the most un-senior team and then give it to New Hampshire’s Jeanne Shaheen and whoever got appointed to succeed Gregg.
I found it really funny. But then again, I’m not all that good at humor.
Michael Bennet, who has a kind of endearing, bumbly style, told the story of how when he was prepping for his “interview” with Colorado Governor Bill Ritter, he ought to check in with his wife Susan Daggett on what she had been up to in her professional work.
Daggett, who was clearly better known to the assembled crowd of enviro-activists and Colorado green elite types as the former lead attorney for EarthJustice and has worked for both the Natural Resources Defense Council and Sierra Club, gave according to Bennet a two hour run down of some very high-powered work on her Colorado-related and global environmental advocacy.
Bennet then told her, “Maybe you should go see the Governor for an interview [for the Senate seat].”
Lots of folks laughed — and then said, you know — she might be a pretty great Senator.
Other notables besides former Senator Tim Wirth and his wife Wren were former Senators Chuck Robb and Don Riegle. SEIU’s Andy Stern was there as was Council for a Livable World Executive Director John Isaacs and former US AID Deputy Administrator and presidential candidate spouse Hattie Babbitt. Also met up with Atlantic Monthly editor and brother to the Senate’s least senior member James Bennet.
I like that Susan Dagett has two t’s in the name. Hattie Babbitt has two pairs of two t’s.
But what’s up with Michael Bennet. Did someone add an “n” to Benet? or drop the “t” in Bennett?
— Steve Clemons