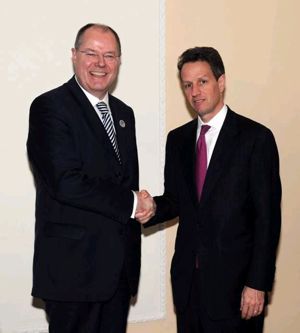 The Department of Treasury has a whole lot on its hands — like keeping the financial sector from cratering further, keeping Citibank management from sneaking another private jet into their own stimulus plans, and convincing the rest of the world that Americans really do know how to run a capitalist economy (if in fact we have one any longer).
Treasury Secretary Tim Geithner was off doing photo-ops in Rome with other of the world’s leading financial secretaries, and I received this note from Treasury regarding the photo to the left:

Oops!
Wrong Guy. That’s Peer Steinbrueck.
I just checked — and Treasury just got this fixed. Now the link goes to:

Glad it’s fixed. (they still forgot the umlaut! or they can add an “e” after the “u” in his last name). The U.S. needs some cooperation from Germany and Russia nowadays — and this was an easy way to get two important noses out of whack — unless of course that is what we were trying to do?
— Steve Clemons