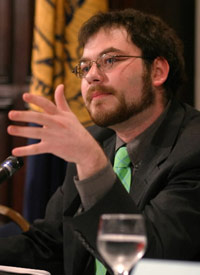 Having attended the launch for Matt Yglesias’s new book on foreign policy on Friday, I might have to break a rule of mine. I might have to read a book whose thesis I fundamentally agree with.
I made that rule after reading Jared Diamond’s Collapse a few years ago. Like his groundbreaking Guns, Germs and Steel, Collapse is thoroughly researched and convincing. But its conclusion — environmental mismanagement threatens the survival of civilizations — was a pretty easy sell for me and for that reason was less thrilling to read.
Ditto Yglesias’s thesis in Heads in the Sand. To sum up: by shifting to the right and/or trying to change the subject from foreign policy to domestic issues, Democrats have tended to cede political and substantive ground on U.S. foreign policy to Republicans.
On its face, this seems to be the basic conventional wisdom of the left at the moment. But this book’s thesis goes a step further in its prescription. Instead of merely calling for louder and more pronounced dovishness and restoration of sound/open governance (though these too are important), Yglesias calls for Democrats to more clearly articulate an alternative vision based on the principles of liberal internationalism.
Withdrawal from Iraq gives Democrats a politically easy way to be liberal on foreign policy since it touches people’s lives and some people equate it with undoing the biggest foreign policy mistake in a generation (invading Iraq in the first place). But they’ve not yet incorporated withdrawal into a greater vision for the U.S. role in the world. I’m concerned that when the withdrawal is complete or mostly complete, and Democrats no longer have a widely agreed policy point to hammer home, they’ll turn back to their old ways if they don’t start talking big ideas now.
I don’t really know if this is a direction Matt Yglesias is headed with his book, but I’m philosophically aligned enough with him that I may read it to get some ideas for how this problem might be resolved.
— Scott Paul
Note: Despite the partisan approach to Yglesias’s book and this post, there are some terrific and responsible Republican public officials offering smart foreign policy ideas. Steve regularly mentions Chuck Hagel; I’ll call attention to Dick Lugar, all around decent guy and my organization’s “Legislator for Global Solutions.” Check out this link — Lugar really did show some really incredible leadership on a number of fronts last year.