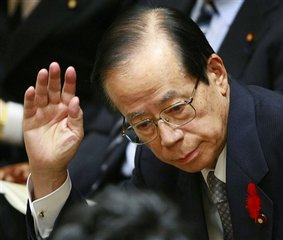 This is a guest post on Japan’s political scene by Mindy Kotler, Director of Asia Policy Point in Washington, D.C. Originally, TWN posted a pre-version of this piece that has since been adjusted. Kotler’s prediction about Sunday’s election outcome was dead on target.
On Sunday, April 27th, one of Japan’s most conservative districts will hold a by-election for a seat in the House of Representatives (Lower House). This will be the first parliamentary election since Yasuo Fukuda became prime minister in September 2007. Polls indicate that the opposition Democratic Party of Japan (DPJ) will win. If true, then decades of issue-free elections and one-party rule of the Liberal Democratic Party (LDP) are unraveling.
A victory will reflect not only the unpopularity of the Fukuda Administration, but also the inability of the ruling LDP to address fundamental concerns of Japan’s voters. Seven years of greater engagement with the global economy, international regulations, and world security have not brought Japan greater peace or prosperity. North Korea and China are more threatening, and economic inequalities have widened.

The result is that voter discontent is great and growing. And the ruling LDP does not seem to know how to respond. An annual government Cabinet Office poll published in mid-April, but taken in mid-February found that 75% of Japanese feel that their government does not reflect how they are thinking or what opinions they hold. They say that the politicians need to listen to them more.
Before this survey, the first substantive expression of voter dissatisfaction came last July, in the midst of the messianic Abe Administration efforts to rebuild a “beautiful” and “proud” Japan. The opposition DPJ in coalition with the Social Democrats and Communists won an unprecedented majority in the House of Councilors (Upper House). This produced a “twisted” Diet (Parliament), a peculiar Japanese description of the country’s first party split between the Upper and Lower Houses.
The DPJ is unashamedly using its control of the Upper House to hold up the legislative process. It is a strategy that highlights government accountability and questions government policy. The DPJ has artfully employed it on high profile, easy to understand issues. The LDP, however, is treating the DPJ as some sort of annoying, buzzing noise. Instead of reaching out and crafting compromises with the opposition, the LDP has gone about business as usual. Legislation and nominations are submitted without regard to opposition input or warnings to block them. The LDP, used to getting what it wanted through simple internal brokering of the spoils, is finding “politics” trying. Strangely, the Japanese press agrees and refers to a hoped return to the one-party dominated Diet as “normalization.”
Although the DPJ’s goals are ill-defined, if only opportunistic, the party is forcing a public discussion on a host of important issues that rarely get serious debate, by established politicians. Two Bank of Japan governors and one vice governor were rejected because the DPJ questioned the independence of nominees who were Ministry of Finance bureaucrats. The DPJ objected to the renewal of the White House-requested Indian Ocean “anti-terrorism” mission as a costly, unconstitutional support for an “American war.” Upper House will not approve the treaty-obligated “host-nation” support for the US military in Japan because of objections to taxpayer funds being used for salaries related to base entertainment. And the DPJ wants to end a “temporary” 30 year-old gasoline surcharge that is used solely for road construction, which most Japanese perceive as a corrupt patronage system building roads to nowhere.
The Fukuda Administration’s fallback position is Article 59 of the Japanese Constitution that allows the Lower House to override an Upper House rejection of or failure to take action on legislation with a majority of two-thirds or more of the members present. Until January, this tactic had only been used once, and that was in 1951 to get approval for one of Japan’s untried Class-A war criminals to hold the monopoly over motorboat racing and gambling. In January, the ruling coalition used its supermajority in the Lower House to force through a watered down, one-year extension of the Indian Ocean Mission to refuel ships involved in the war against terrorism.
Fukuda has promised to use this legislative maneuver again on April 30th to get approval for continuing the gasoline and other road-related surcharges. He fears that the revenue shortfall caused by ending the tax will do more political harm than voter dissatisfaction over more rising prices. LDP strategists have also signaled the Lower House override liberally. The Prime Minister’s other strategy, however, is to whine publicly that the DPJ is obstructionist and to apologize repeatedly for allowing the DPJ to cause “confusion.”
Apologies are not enough. As April unfolds, the Japanese people are experiencing a series of economic shocks and uncertainties, most caused by government mismanagement and arrogance. The promise to retrieve all 50 million lost pension records by March was never achieved. In mid-April, most pensioners over 75 began to pay higher health insurance premiums through a confusing new system and full-time employees were subject to increased payroll pension deductions. Food prices are rising, with some staples increasing over 10% in one month and are expected to increase more as the costs of wheat, soybeans, and fuel oil grow. In May, the local government tax assessments are sent out.
The government noted this month that “the economic recovery appears to be pausing” and that wholesale prices rose at the fastest pace in 27 years. Business confidence is falling, industrial production is flat, and export growth is slowing. The Bank of Japan is reportedly ready to downgrade its forecast for real economic growth in fiscal 2008 to the mid-1% level from a previously projected 2.1%.
Although nearly 90% favor lifetime employment, the OECD has found that an unprecedented one-third of Japanese are in temporary or part-time employment without benefits. The annual Cabinet Office survey noted above found that the economy topped the list of major concerns this year, the first time in four years. Prices came second and food was third. An early April survey by Japan’s leading business newspaper found that saving money is on roughly 90% of people’s minds when they go shopping, as living expenses continue to rise.
The gradual erosion of the paycheck has become a stealth force driving Japan’s politics. Thus, it is odd that Prime Minister Fukuda has found it necessary to apologize for the suspension of the gasoline surcharge, a tax cut that temporarily benefits the rural areas and working people during an economic slowdown. This does not seem like good politics. Then again, Mr Fukuda’s party will lose this Sunday’s election, and maybe more.
— Mindy Kotler
Update from Mindy Kotler: If you are interested in following the “inside baseball” of Japanese politics, I suggest the following blogs to get you started. Be warned, these are not for the casual reader:
Observing Japan
Shisaku
Globaltalk 21
Japan Considered (podcast)

View From Your Window: The Willow is Gone
Matt Yglesias in Book Length