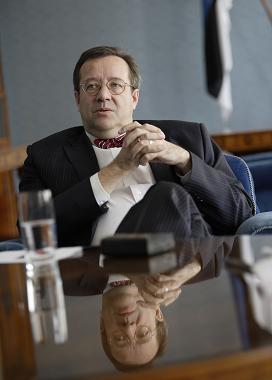 Estonian President Toomas Hendrik Ilves‘s refreshingly wry sense of humor and sharp wit provided welcome relief from an intenisve Young Atlanticist Summit day of speeches, lectures, and meetings (especially for those of us who were still sleepless from jetlag, fretting over lost baggage, and breaking in an assemblage of borrowed attire that was one bolo tie away from saying “Dont Mess with Texas”).
Bow-tie clad Ilves spliced in his acerbic humor to complement a tough but well-articulated set of posiions on NATO issues that amounted to soft-jabs at Russia. For instance, he suggested that cyber-terrororism — like the kind exhibited on Estonia in April of 2007 and linked back to Russia — should be treated like the terrorism that targets physical infrastructure and consequently, perhaps even trigger NATO action in acordance with Article 5.
President Ilves bluntly criticized his neighbor’s ruthlless exercise of energy as a foreign policy tool (though hardly the only one as Flynt Leverett has argued) citing a figure that Russia has employed energy shut-offs forty-one times since the 1990s as a source of geopolitical leverage. However, he made no mention of why, if this was the case, Europe continued to imprudently expose itself to such market vulnerabilities and energy chokepoints. It is unclear whether he was just miffed by Russia’s clever use of energy realpolitik or whether he believed it ought to be somehow challeneged on legal grounds.
But the most entertaining line of the day came when a member of the Ukrainian delegation asked Ilves for some pearls of wisdom based on Estonia’s experience seeking NATO membership. President Ilves cut right to the chase: “Don’t be a Marxist” he said, “and by that I mean Groucho Marx-ist”. He reminded the audience of the scene where Groucho Marx walks into a bank with a gun to his head claiming that he’ll take his life unless they give him all their money. The analogy drew laughter but captured an essential truth.
Ilves went on to explain that countries attempting to wield the threat of internal upheavel, civil war or political collapse to leverage entrance into NATO would likely fall short or undermine their own case for membership. “Don’t say you’re owed anything” he argued. Rather, prospective countries needed to make the case on their own merits — that they are on par with other admits and have made domestic reforms that warrant entrance. Overall, he argued that entrance needed to be sought for the sake of the country, for the citizens of the nation.
Though I found the argument convincing, it seemed to reveal perhaps why Germany (amongst others) feels Ukraine is in fact not ready for entrance into NATO. The deep political divides in Ukraine loom large, with a large chunk of its population still opposed to NATO entrance and politicians wielding the promise (or threat) of NATO accession as a political gambit to shore up power rather than to act on the will of their people. This seems more Groucho Marx-ist with these pro-NATO politicians threatening the life of their country with a potential split over the issue in order to enter an alliance that might consolidate their party’s power.
A Ukrainian colleague pointed out to me that the people in Eastern Ukraine who are pro-Russian and against joining NATO are essentially being manipulated by elites (a non-unique event in democratic politics, even in the paragons of democracy – e.g. soft money in U.S. politics) and Russian propaganda tethered to cash payments to oppose an organization they know nothing about. But nevertheless, it would be completely rational from the perspective of these Ukrainian voters to oppose a process that would, in their minds, offer them nothing tangible yet threaten the supply of these cash handouts (let alone, as Anatol Lieven has pointed out, discounted energy prices and the remittances sent home from Ukrainian workers in Russia) which function like crude forms of politically targetted development aid. That is, until they are sufficiently convinced in larger margins that the payoff NATO brings to their lives is worth the cost (a case the proponents of NATO need to resoundingly win rather than gloss over en route to entrance into the military alliance).
So I agree with the Estonian President — Ukrainian leaders should not act like Marx-ists but rather take the time necessary (years maybe) to engage in the internal public debate needed to reach a consensus rather than proceed down this path of political brinksmanship that could tear their country apart.
— Sameer Lalwani
(This piece is cross-posted at the Young Atlanticist Blog where the author will continue to blog live from Bucharest during the NATO summit).

<em>Live from Bucharest</em>: Morning Coffee with Karzai
Leo Hindery Today: Discussing the “Real Economy” Instead of a “Delusional Economy”