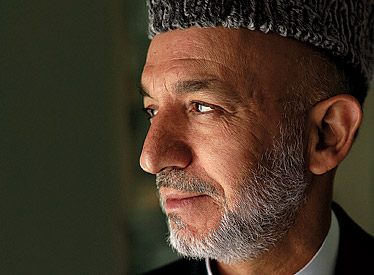 For the early birds on the east coast (or the late night blog readers on the west coast), President Hamid Karzai will address the Young Atlanticist delegation in Bucharest along with students at the University of Kabul via a video teleconference link – which you can tune into live by going to the Young Atlanticist homepage (for those who miss it, I will eventually post links to where the recordings are saved).
Karzai might also face a tough crowd, particularly from the University of Kabul students, like Secretary General Jaap de Hoop Scheffer faced yesterday as my fellow Bucharest blogger Alex Dobrota reported.
Afghanistan is perhaps the centerpiece of the NATO summit (though expansion rates a close second) as it is the first intensive out-of-theater deployment for NATO in its 59 year history. And it has not been easy. One of the reasons for regress and a resurgent Taliban that has been cited by many during this NATO summit in Bucharest is the lack of a coordinating mechanism or actor to harmonize tactical operations with civilian efforts at reconstruction through the PRTs, and the morass of development aid that is tethered to different national objectives and time lines.
A couple weeks ago, Zalmay Khalilzad wrote an op-ed throwing strong U.S. support behind the United Nations to take on that role of coordination in Afghanistan.

There is only one way to end the confusion: the United Nations must take on the primary coordination role, and donors must show a willingness to be coordinated. The new resolution allows this to happen in a number of ways.
First, Mr. Eide will need to oversee the coordination of civilian assistance with military efforts of the two military organizations operating in Afghanistan, NATO and the International Security Assistance Force. While it’s promising that those two organizations are meeting in Bucharest, Romania, next month to discuss better integrating their efforts, success against the insurgency will require efforts to ensure that military actions to secure areas from the enemy are coordinated with civilian efforts to establish good governance and economic development.
Second, Mr. Eide must coordinate the efforts of the international community to support the Afghanistan Compact, a five-year plan agreed upon in 2006 by the government of Afghanistan, the United Nations and the international community that requires Afghan leaders to take steps in reform and institution-building in exchange for commitments of sustained support. The United Nations must have a stronger role in overseeing the increasing capacity of Afghan ministries and their anti-corruption efforts.
Third, the new United Nations special representative should help the leaders and people of key donor countries understand achievements and challenges. This is the only way that the friends of Afghanistan can fully appreciate the return on their investments.
Last, Mr. Eide will have a mandate to engage Afghanistan’s neighbors to help stabilize the country. In the aftermath of 9/11, regional powers came together to support the so-called Bonn agreement, which enabled Afghans to freely choose their own government. Reclaiming the spirit of Bonn must be a priority.
The United States is fully behind the United Nations in the mission. Afghanistan is important not only because it was the origin of the attacks of 9/11 but also because it is the keystone of the geopolitical stability of Central and South Asia. Moreover, success in Afghanistan will be a major step in helping to create security, stability and progress in the broader Middle East, which is the defining challenge of our time.

Initially Paddy Ashdown had been nominated but was vetoed by President Karzai, some suggested because Karzai believed Ashdown’s presence might impinge on his governing autonomy and discretion. So now Kai Eide is being slated as the man for the job. I suspect Karzai will comment on how this coordinating mechanism/agent interacts with Afghan sovereignty.
Yesterday provided an excellent but gruelling set of sessions with President Bush in the morning, NATO Secretary General Jaap de Hoop Scheffer, NATO Supreme Allied Commander Europe General John Craddock, Estonian President Toomas Ilves, Georgian President Mikheil Saakashvili, Dutch Prime Minister Jan Peter Balkenende (who apparently has been likened to Harry Potter – though he’s not the first as Blake Hounshell noted last fall).
Because we attended President Bush’s speech in the morning, I was advised not to bring my laptop for the delays it might cause in the intensive security screenings. In hindsight this turned out not to be the case but as a result of not having a laptop the whole day, I’m still transcribing my hand written notes into blog posts that I hope to post today between the session with Karzai, the Albanian Prime Minster, British Foreign Secretary David Miliband, and a NATO energy crisis simulation.
— Sameer Lalwani
(This piece was cross posted at the Young Atlanticist Blog).

One comment on “<em>Live from Bucharest</em>: Morning Coffee with Karzai”