Obama, Japan is a sleepy Japanese fishing port that went nuts for Obama — cheering him on and dancing for him in March 2008 when “his winning steak in the U.S. presidential primaries stalled.” And above, Obama village dwellers sing “O-B-A-M-A! Obama!” as a tribute to Barack. 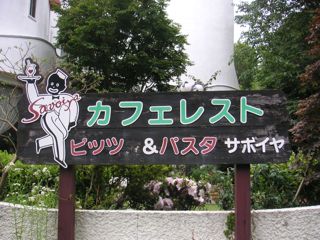 But strangely and shockingly, in another part of Japan this past weekend, I ran into this “blackface” sign (pictured to the left) for the Savoiya Restaurant in Izu Kogen.
Blackface is considered by most to be racially derogatory and unacceptable.
I remember years ago when NPR and Fox news commentator Juan Williams visited Japan as the guest of the Hitachi Foundation to try and build better relations between Japanese and the African-American community — in part an attempt to roll back the influence of Japanese publishing and advertising purveyors of then proliferating blackface signs and other anti-black racially charged commentary.
Izu didn’t get the message.
It’s just a single restaurant and Izu and its hot springs are well worth the trip.
But Barack Obama might want to stop by this spot in Izu Kogen and glare a bit at the sign before ordering a pizza there. I bet there would be quick change.
— Steve Clemons

6 comments on “In Japan, Izu Definitely Not in Same Groove as Obama”