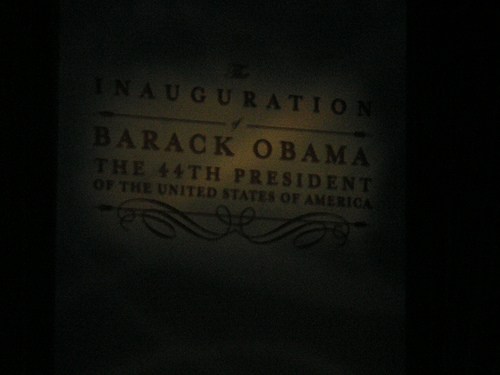 Hail to the Chief is being played for the last time for Bush as the incumbent President of the United States. That song will be Barack Obama’s alone for the next four years.
The National Mall is the most full it has ever been for an event like this — and it’s 25 degrees outside. People are so excited. I was out til 3 am last night, enjoying the Huffington Post party until things shut down at 2 — and everyone was on a high.
I spoke with Queen Noor last evening at the Arab American Inaugural Gala — and was pleased she asked people to think of those lost and still suffering in Gaza. She was sensible and bold to remind people of the disaster there and to remind people that this enthusiasm for good had to be directed at solving problems around teh world.
Joe Biden is now walking out. What a journey it has been for him. I’m a huge fan of Joe — and think that he is going to be a steadying and informed balancer in the White House.
And soon Obama himself will be walking out…..this is history. And now he is.
Wow.
I was speaking with Gregory Craig, close friend and confidante of Barack Obama and the new White House Counsel, and he said, “Steve, I know I’m going to lose it up there.”
There are going to be a lot of tears of joy, of love of this man, and of relief that finally America has someone who looks like America in its fullest form.
Rick Warren is up next. I was feeling so good. Let’s see what he does for me now — very little applause for him.
Glad Warren is over — very evangelical Christian. Zero outreach. Glad we can move on.
And now Aretha….always amazing. Let Freedom Ring. . .or as Wynton Marsalis and Sandra Day O’Connor said last night at the Rockefeller Foundation sponsored Kennedy Center MLK tribute, “Let Freedom Swing. . .!”
Joe Biden — the oath. . .and now VICE PRESIDENT OF THE UNITED STATES!
I love Yo-Yo Ma, and his son Nicholas Ma, now working at McKinsey, is soon going to be playing some great role in America’s diplomatic machine. He used to work at the United Nations, and I’m encouraging State Department officials to recruit Nicholas.
Wow….Obama is now President of the United States, even without the swearing in as it is just past noon.
“I, Barack Hussein Obama. . .solemnly swear. . .”
Amazing. It’s done!
Now, we desperately need to get to work on real world problems. . .but I have to admit that I’m really happy that Obama is President today.
Let’s hear what he says in his speech. . .
Humbled by the challenges ahead. Thanks Bush for his service (and much more applause for Bush than Rick Warren. . .)
He’s calling for national resolve, a fall back on America’s first principles, sacrifice, standing together. Reminding people of America’s hard, and often harsh history, the battles for ideals.
Here is the entire speech that a friend just sent me:

The most important thing Obama’s speech says is this:

As for our common defense, we reject as false the choice between our safety and our ideals. Our Founding Fathers, faced with perils we can scarcely imagine, drafted a charter to assure the rule of law and the rights of man, a charter expanded by the blood of generations. Those ideals still light the world, and we will not give them up for expedience’s sake.

This is worth a lot. No false choices between our ideals and our security. That needs to be said over and over again. Obama is on target here.
The speech is humble, and more a warning of tough times on their way, than it is inspiring to take America to new levels. This is a speech that is like Obama, essentially conservative and cautious, serious. And he’s calling the country to stand together to deal with the really hard times ahead. I like it — and think that this cautious Obama is someone who does want to change things, not just pretend to.
His shout out to the Muslim world will be appreciated — and is appreciated by me. This outreached hand to Muslims has been missing from the Obama operation. So another good check mark for Obama.
Behind the scenes, Jimmy Carter and Bill Clinton are misbehaving and engaged in escalatory snubbing. Their conduct is unbecoming — when Obama is trying to call everyone to push the reset button, to work together again on tomorrow’s problems, two of our former Presidents are acting like school children.
Obama really hit a homer by reminding people that someone is now standing before them, taking “the oath”, when just a few decades ago he wouldn’t have been able to be served in many of the nation’s restaurants.
Powerful ending stanza:

America. In the face of our common dangers, in this winter of our hardship, let us remember these timeless words. With hope and virtue, let us brave once more the icy currents, and endure what storms may come. Let it be said by our children’s children that when we were tested we refused to let this journey end, that we did not turn back nor did we falter; and with eyes fixed on the horizon and God’s grace upon us, we carried forth that great gift of freedom and delivered it safely to future generations.

I was moved by the speech. . .and most of all am thrilled that. . .
BARACK OBAMA IS THE 44TH PRESIDENT OF THE UNITED STATES.
Note to Barack Obama’s speechwriters and fact checkers. Obama said:

Wrong. Forty-three men, not forty-four, have taken the oath of office as President. Grover Cleveland did it twice as the 22nd and 24th President of the U.S.
The Reverend Dr. Joseph E. Lowery is giving the closing prayer — and Rick Warren could learn some things from him. Amazing and moving message.
Lowery is the person we should have heard from when this ceremony marking the nation’s most important hand off of power began.
And now, George W. Bush and family are about to fly off into the rest of their lives without the power of the presidency to wield tomorrow.
Both President Obama and Vice President Biden showed their commitment to reach across the aisle and country by escorting Laura and George W. Bush to his helicopter.
All quite beautifully, respectfully scripted.
Sent my note about the error in Obama’s speech on the number of men who have sworn the presidential oath to CNN’s top political producer and received this note back:

Wow, Steve. You’re really a stickler…
But yes – you are correct.

I hope Jeffrey Toobin, Wolf Blitzer, Paul Begala or Anderson Cooper use it — sent it to all of them.
More soon — I have to go do some media commentary and will be watching the Inaugural Parade from the Embassy of Canada on Pennsylvania Avenue as the guest of Ambassdor and Mrs. Michael Wilson.
All best to everyone for a new day and new start in America. As Obama said, the times ahead will be tough — but we get to push “reset” today.
— Steve Clemons