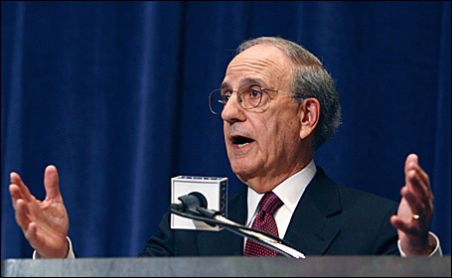 This is a guest post by Amjad Attalah, Co-Director of the New America Foundation/Middle East Task Force.
As Barack Obama was sworn in today as the 44th president of the United States, Israeli troops were rapidly withdrawing from the Gaza Strip after both Israel and Hamas announced “unilateral” cease-fires.
Simultaneously, Reuters was reporting that Senator George Mitchell was being strongly considered to become the next Middle East Envoy – a man of considerable gravitas who negotiated an end to the more intractable Irish-British dispute (a conflict with significant similarities with the Israeli-Palestinian conflict).
I met Senator Mitchell when he led the Sharm el-Sheikh Fact Finding Committee appointed by former President Bill Clinton. He completed his work in the first five months of President Bush’s presidency – and it was the closest President Bush ever got to addressing the underlying fundamentals of the conflict.
There is no doubt in my mind that had anyone else been elected to become the President, the odds are that the war in Gaza would have remained on-going, and hundreds – if not thousands – more Palestinian civilians would have lost their lives.
There is no evidence that President Obama had his aides send any messages to Israel before his inauguration suggesting that it be best that Israel finished campaigning in Gaza by today.
He didn’t need to.
The concept that political disputes can be bombed into submission – that populations could be “taught a lesson” by starving, bombing, or rocketing them, left Washington, DC on Air Force One this afternoon.
Israel could have ended the bombing of Gaza at any time once it started and claimed the same “victory.” We can only wish that the inauguration came sooner.
This doesn’t mean that all is well, or even that the latest cease-fire will hold. But it does mean that today the world is holding its breath, waiting to find out if the United States is about to re-assume the mantle of world leader, not in bomb-dropping shock and awe excitement, but in hard headed political realism that recognizes that our physical strength is a reflection of our moral strength.
And before Obama even walks into the White House, he will already have his first foreign policy success.
— Amjad Atallah
Update: Steve Clemons weighing in here. I just want to give public credit to Ben Smith at Politico for being the first person to whisper in my ear that this George Mitchell appointment was coming down the pike.
I talked to some senior Israeli diplomats today and yesterday — and they say that that they greatly welcome Mitchell’s appointment. And many Arab leaders I have spoken to in the last couple of days have said exactly the same. Good choice by Obama and moves beyond the polarization that has been occuring over some others who might have been named.
— Steve Clemons