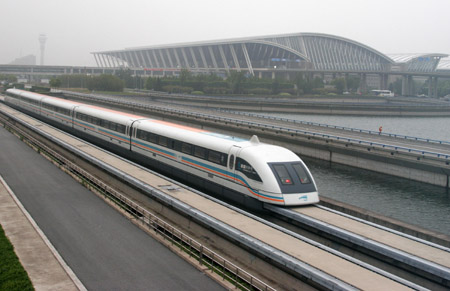 I made a bad mistake at a wedding not too long ago — in Big Fork, Montana. I was sitting next to the sister-in-law of the bride who had to give a toast, something with flourish and some punch.
I had been thinking about Jeremy Bentham out there on Flathead Lake — and was thinking about a Bentham-inspired axiom that ‘happiness was a function of relative deprivation.’ I encouraged her to use that line regarding our friend “Tara” as a comment that she didn’t know how relatively unhappy her life was and happy it could be until she and her new husband met each other and married. I thought it was all rather touching — in theory. But the room of 200 people at the dinner went silent when the sister-in-law said it. There was some not so polite giggling — but the toastess recovered.
But let me try again. I just rode the Shanghai Maglev train that runs between the airport and Pudong. The trip was 7 minutes and 20 seconds — to go a long way. The top speed reached was 432 kilometers an hour — or 270 mph. It was amazing.
I want one — and am not sure what American technological leadership means when we don’t have anything like that in the U.S. We could travel from DC to New York in under an hour. I know that this may be an old debate for some, but now that I have experienced what could be, I’m now even more dissatisfied with the sorry state of America’s basic infrastructure.
Indeed, happiness (and unhappiness) are a function of relative deprivation.
And when I left Washington ten days ago, I was reading that it was going to take 15 years to extend a subway line from the DC metro to Dulles Airport — and that it would still take 1 hour and 20 minutes when completed to travel from downtown Washington to the Airport. Our social objectives should be higher than they are.
— Steve Clemons