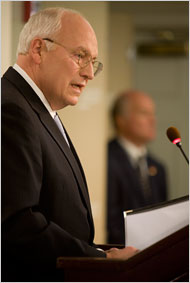 Dick Cheney’s post-office media tour has reached an unprecedented level. Today the American Enterprise Institute hosted the suddenly chatty former vice-president for a speech on national security. This was conveniently scheduled to air immediately after President Obama’s national security speech at the Archives. While this face-off was interesting and clearly presented both sides of the complicated national security discussion, I’d give anything to see a real Cheney-Obama debate. But, of course, the President has more important things to do than go back and forth with the former vice president on the merit of his national security policies.
Rarely known to mince words, Cheney targeted his speech at specific actions and political enemies with laser-like precision. He took on Obama, Nancy Pelosi – though not by name, the New York Times, and just about every anti-torture argument of recent months. I would like to call special attention to the assertion Cheney made today which has become a mantra amongst those seeking to defend the Bush legacy.

“To the very end of our Administration, we kept al-Qaeda terrorists busy with other problems. We focused on getting their secrets, instead of sharing ours with them. And on our watch, they never hit this country again. After the most lethal and devastating terrorist attack ever, seven and a half years without a repeat is not a record to be rebuked and scorned, much less criminalized.”
Technically the gist of this statement is correct. There has not been another attack on US soil since September 11th 2001, but to say that al-Qaeda has not “hit” us since that fateful day is just plain wrong. Al-Qaeda and various like-minded organizations have killed just under 5,000 US soldiers in Iraq and Afghanistan, which is nearly double the number of casualties we suffered in the attacks of 9/11. Most American citizens would consider this a substantial hit. Al Qaeda and other terrorist organizations no longer need to board a plane or work their way through customs and border patrol to attack American citizens. Elaborate plans have been abandoned for teenage recruits with suicide jackets.
The loss of civilian life in Iraq and Afghanistan is also alarmingly high. An estimated 100,000 civilians have died in Iraq since the launch of Operation Iraqi Freedom. And around 2,000 civilians are killed each year in Afghanistan as a side effect of Operation Enduring Freedom. While the responsibility of these civilian deaths is not to be laid squarely on the United States, I think these innocent victims are another “hit” to the U.S. that Cheney has conveniently overlooked.
— Faith Smith

Checking in from China
Guest Post by Win Monroe: Discerning the Substance of the Obama-Netanyahu Meeting

32 comments on “National Security According to Dick Cheney”