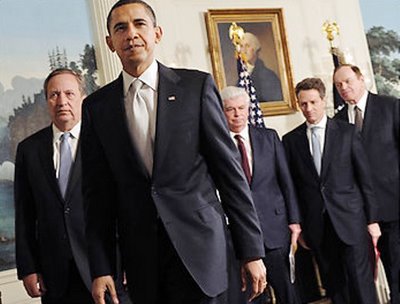 Regrettably, the Obama administration seems to be fumbling the ball on an economic policy course that restores confidence in the American economy on both the optics level and also on a substantive front that reorganizes the “social contract” and design of the real economy in the U.S.
Obama, in his ‘loyalty’ to his current economic team and the mistakes they are making is the antithesis of Abraham Lincoln. Obama may have tried to mimic Lincoln’s “team of rivals” approach to politics — but he needs to read the chapters on the number of generals Lincoln fired during the Civil War to finally get things moved forward.
Obama may need to fire a number of his economic generals who have been trying to restore Wall Street to what it once was — not boldly and critically reorganize the financial sector in a way that the dysfunctional behavior that characterized its bubble success is dismantled and reshaped.
Civil society should not wait quietly while Obama’s team continues to fumble — and while its key economic policy chiefs play “point the finger” at their colleagues behind the scenes. It’s time for serious discussion about what needs to be done. . .and we need better benchmarks than we have for applauding, critiquing, and simply measuring the policy steps the administration is taking. 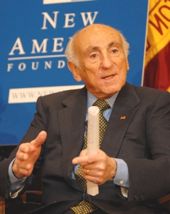 Paul Krugman, James Galbraith, Joseph Stiglitz, Robert Reich, Robert Kuttner and others have been invaluable commentators and truth-tellers on the macro and micro dimensions of the economic policy steps and missteps the Obama team has been making.
Under the auspices of the New America Foundation Economic Growth Program, Next Social Contract Initiative, and Smart Globalization Initiative — my colleagues and I are organizing a set of economic policy forums that are going to raise questions about our economic policy course.
The first “Bernard L. Schwartz Economic Policy Symposium” will take place in Washington at the New America Foundation offices on Thursday, 26 March 2009. Attendance information is here.
Financier and former Loral CEO Bernard Schwartz has been trying to push the administration and Congress to realize that there are different kinds of deficits the nation has to struggle with — and the most important in his mind is leaving an “infrastruture deficit” to the next generation. He will be helping to open this important conference. 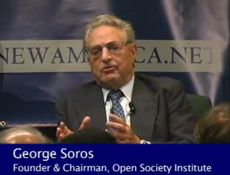 Philanthropist and investor George Soros will also be speaking — and has been pushing a five point plan for the Obama team to consider. His new book is about to appear — but a short primer piece of his recently appeared on Huffington Post and outlined five key points of an economic recovery plan that the Obama team has flubbed up on for the most part:

1. A fiscal stimulus package
2. A thorough overhaul of the mortgage system
3. Recapitalization of the banking system
4. An innovative energy policy
5. Reform of the international financial system

Former National Economic Adviser to President Clinton, Laura D’Andrea Tyson, will also be engaging in a discussion with Chief Economics Commentator and Associate Editor of the Financial Times Martin Wolf. Wolf, who recently authored the book Fixing Global Finance thinks that there is very little that can be done at present time to respond to the collapse of consumption by American consumers that have been the essential driver of global growth. Tyson has been very focused on the question of what America needs to do to rewire a “new social contract” with middle class American workers who have been left behind by the patterns of economic growth in the past.

I have been suggesting for some time that “Tysonomics” — which recognizes a need for government prioritizing of certain strategic sectors and of regulation — is very different than the Rubinomics that dominated the Clinton administration (even when Laura Tyson worked for it) and which arguably were at the root of much of the deregulatory, neoliberal mania that helped hatch the economic disaster the nation and world find themselves in today.
Others in this conference will be Mark Zandi, Chief Economist and Co-Founder, Moody’s Economy.com as well as author of Financial Shock: Global Panic and Government Bailouts — How We Got Here and What Must Be Done to Fix It; Tom Gallagher, Senior Managing Director, International Strategy and Investment (ISI) Group; Richard Vague, Chairman and CEO, Energy Plus and Founder and Former Chairman & CEO, First USA Bank; Leo Hindery, Managing Partner, Inter-Media Partners and former CEO, AT&T Broadband Network as well as Former CEO, Yankee Entertainment and Sports Network — who has been writing recently on the “Obama job creation deficit”; Jeff Madrick, Director of Policy Research, Schwartz Center for Economic Policy Analysis, The New School and author most recently of The Case for Big Government.
Also. . .Sherle R. Schwenninger, Director, Economic Growth Program, New America Foundation; William Gerrity, Chairman and CEO, Gerrity International; Clyde V. Prestowitz, Jr., President and Founder, Economic Strategy Institute; Nicholas Lardy who recently co-authored China’s Rise: Challenges and Opportunities and is Senior Fellow, Peterson Institute for International Economics; and finally one of the most prescient forecasters of today’s major economic crisis — Desmond Lachman, Resident Fellow, American Enterprise Institute.
I will be moderating the meeting along with my colleague Sherle Schwenninger and New America Foundation President and New Yorker staff writer Steve Coll.
Bernard Schwartz. . .George Soros. . .Laura Tyson. . .Martin Wolf. . .Clyde Prestowitz. . .Desmond Lachman. . .Tom Gallagher. . .Steve Coll. . .Mark Zandi. . .William Gerrity. . .Leo Hindery. . .Richard Vague. . .Nicholas Lardy. . .Jeff Madrick. . .Sherle Schwenninger. . .and others make up quite a line up for a great meeting.
For those who are deeply interested in these issues, I should note that George Soros’ revised book (in paperback) will be released next week on March 30th and is titled The Crash of 2008 and What it Means: The New Paradigm for Financial Markets. Soros will also have a major economic policy critique/op-ed in tomorrow’s (Monday, 23 March) Financial Times and another economic policy op-ed in Tuesday’s (24 March) Wall Street Journal. Leo Hindery will have a front cover featured article on the Obama administration’s job creation deficit in the April 1 edition of The Nation which should be online early this next week.
This entire conference will STREAM LIVE on this blog, The Washington Note between approximately 8:30 am and 1:00 pm EST on Thursday, 26 March 2009.
If you would like to attend, RSVP information is here.
The purpose we have in organizing this meeting is to try and position some of the key issues that should be considered at the London G-20 meeting and to begin to emphasize that the fumbling on economic policy needs to stop.
It’s time to begin organizing a Team B economic policy effort — even if it is organized by a network of concerned civil society leaders.
— Steve Clemons

The Unintended Consequences of Taxing Bonuses: Increased US Political Risk
Rendell, Schwarzenegger and Bloomberg on Target in “Deep Infrastructure” Campaign