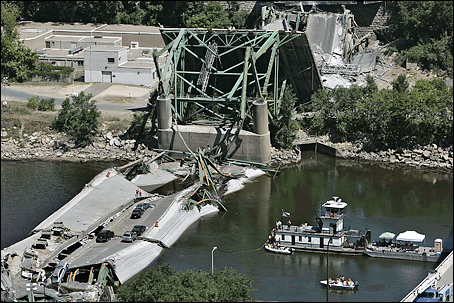 Infrastructure investment and other themes related to the question, “What Will Replace the American Consumer?” will be discussed at the 1st Bernard L. Schwartz Economic Symposium at the New America Foundation next Thursday, 26 March — which is designed to be both an experts program primer for those preparing for the London-hosted G-20 Summit on the 2nd or April.
INFRASTRUCTURE IS BACK
For a generation, infrastructure has been the unwanted stepchild of American politics, neglected alike by conservatives determined to cut back on public investment and liberals focused on expanding the safety net.
But even before the economy collapsed, there was growing recognition of the need not only to fund long-deferred maintenance of America’s crumbling roads, bridges and water lines, but also to invest in transforming America’s infrastructure to make it smart, by incorporating computer technology, and green, by facilitating a shift to low-carbon energy sources.
What is needed is nothing less than a new American System, like Henry Clay’s and Abraham Lincoln’s program for investment in railroads or Franklin Roosevelt’s and Dwight Eisenhower’s federal programs for electrification and highway transportation.
Much of the credit for raising public awareness of this issue goes to Governors Ed Rendell, Arnold Schwarzenegger and New York Mayor Michael Bloomberg and their new coalition, Building America’s Future.
The good news is that the recent stimulus bill included significant funding for infrastructure. But stimulus spending at best can be only a down payment on much larger and more prolonged public investment. The American Society of Civil Engineers (ASCE), in its 2009 report card on American infrastructure, estimates that $2.2 trillion is needed over a five-year period; if stimulus-related spending is included, then more than a trillion dollars is still necessary. But it’s not enough for the money to be spent; it must be spent wisely. Our present system treats infrastructure spending as pork to be doled out by members of Congress on the basis of political rather than technical considerations.
The solution is to create a national infrastructure bank.
Like the European investment bank and many state economic development banks, the national infrastructure bank would leverage private investment on the basis of a capital base provided initially by the federal government.
This would accomplish two things. First, using government funds as a catalyst for private money would enable far more investment than government funding alone, while permitting the government to retain more control of infrastructure assets than in the rival “public-private partnership” approach of leasing tolled highways to corporations. Second, decisions about funding energy, transportation and communications projects would be removed from congressional pork-barrel politics and entrusted to a nonpartisan agency accountable to our elected officials as a whole but not to individual members of Congress.
President Obama’s budget includes funding for a small-scale National Infrastructure and Reinvestment Bank, but the case for something far more larger and effective has been made by many leading experts, including Bernard Schwartz and Sherle Schwenninger, John C. Whitehead and Felix Rohatyn — the author of an important new book, Bold Endeavors: How Our Government Built America, and Why It Must Rebuild Now.
The new consensus in favor of infrastructure is fragile and could be threatened in the years ahead by demands to slash the deficits driven by today’s emergency by cutting productive as well as unnecessary spending.
It is all the more important to emphasize the importance of infrastructure investment as a catalyst for the productive economy that the U.S. must have if it is to grow its way out of its fiscal hole sooner rather than later.
— Michael Lind

Bernard Schwartz, Laura Tyson, Martin Wolf, George Soros Mark Zandi and Others to Headline Major NAF Economic Policy Forum on London G-20 Meeting and What Will Replace US Consumer
Christina Romer Gets it WRONG: “We Need Banks to Lend Like Crazy”

One comment on “Rendell, Schwarzenegger and Bloomberg on Target in “Deep Infrastructure” Campaign”