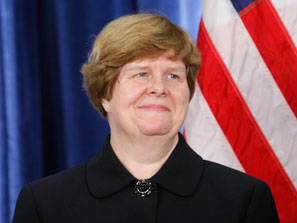 On CNN’s State of the Union show, John King just missed the key zinger statement made by Council of Economic Advisers Chair Christina Romer.
Romer refused to get into the issue of how the Obama administration shoved Senate Finance Committee Chairman Christopher Dodd to “reluctantly remove” a provision that would disallow bonuses from firms that received federal relief — and didn’t want to get into how on one day Summers defended the bonuses when the next day Obama said they stank.
But what really showed Christina Romer’s course — and that of the administration at the moment — was her line that:

We need them [meaning banks and financial institutions] to lend like crazy. . .

WRONG. This kind of statement is a manifestation of the fantasy that the U.S. economy can bounce back to the kind of turbo-charged, quick growth consumption economy we once had — that depends upon consumers devouring goods far beyond their ability to pay for them and depends equally on financial institutions making decisions that are out of line with dependable returns.
“Lending like crazy” is exactly what helped trigger the global financial crisis — and reflating those trends would be a major mistake if that is what the Obama administration is pushing.
Obama admitted a misstep in referencing the “Special Olympics” in his Jay Leno chatter about his poor bowling performance. Christina Romer’s encouragement of “lending like crazy” is a far worse reference that should be immediately addressed and withdrawn by Romer and the White House economic team.
— Steve Clemons

16 comments on “Christina Romer Gets it WRONG: “We Need Banks to Lend Like Crazy””