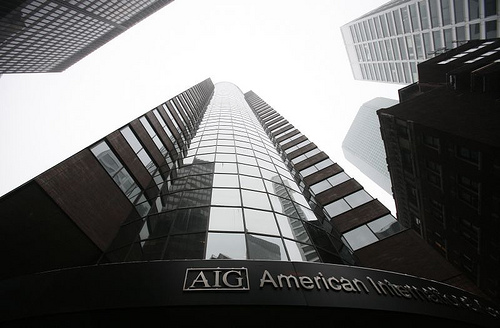 This post was written anonymously by a former investment banker.
As a former investment banker, I know that my views on the taxation of bonuses will be immediately suspect. So let me start by stating unequivocally that many on Wall Street and in the global financial services sector have acted in an indefensible manner. Many still don’t “get it.” Without government funds most, if not all, of the major players, would be out of business today. Those that argue to the contrary are being disingenuous.
Had the government and the Fed not made huge amounts of capital available last autumn, the entire financial system would have collapsed and they would all have been decimated – regardless of how strong their balance sheets or how hedged they were. When all of your counter-parties go under, there’s no such thing as an effective hedge. That’s what Hank Paulson was talking about in September when he warned of global financial collapse.
By providing capital both directly and through the Federal Reserve, the US Government (and other governments as well) kept the world’s financial sector afloat. Moreover, the government provided access to funds on terms that were highly favorable to the banks. (For example, it’s hard to argue that the government got a great deal when, in the case of Citi, whose total market cap today stands at around $14 billion, the Fed and Treasury provided over $300 billion in guarantees and $45 billion of equity – and in return they got roughly a one-third ownership stake in the company.)
For any banker or trader who believes that they were entitled to their seven figure bonus this past year, I recommend that they speak to their former peers at Lehman Brothers and consider what their year end bonus would have looked like had the government not stepped in. The alternative scenario ought to have made everyone in finance stand up and recognize that this is no longer “business as usual.” But it didn’t. Many continued to act like they were Masters of the universe – instead of Masters of the black hole they had, in fact, created.
Having said that, I think that the current backlash against AIG, and by extension, the entire financial sector, is very dangerous and could cause enormous damage well beyond the wallets of the bonus recipients in question. This past week’s move by the House to impose a 90% tax on bonuses will, I fear, be looked upon in the future as a tragic error that raised the level of political risk in the US to a new level.

For generations, one of the great strengths of the US has been its role as the center of global finance. The US represented the world’s deepest and most liquid market for capital, the most predictable and dependable set of rules by which investments and banking activities were regulated and political risk that was considered the lowest in the world. While over the past decade, London, Hong Kong and other financial centers became legitimate competitors to sole US dominance in global finance, the US remained at the top of the league tables in global finance and innovation.
Even with today’s broken system, playing a leadership role in global finance still has enormous benefits. It is a role that the US should work hard to retain.
Which is why I am so concerned with the current legislation rapidly proceeding through Congress. It’s not simply that the proposed tax rate would ensure that all American financial talent will flee the banking sector en masse. Rather, my concern is that this rash, populist over-reaction has exposed the US to a sharply revised calculation of the political risk of doing business and/or investing here.
Political risk is a crucial element in making any investment decision. A great company in a dangerous country is a lot riskier than one in a stable and predictable one. That’s traditionally been one of the main attractions to investing in the US – little to no political risk.
The US Government agency charged with helping companies manage political risk, OPIC, defines it as: “the possibility that political decisions or political or social events in a country will affect the business climate in such a way that investors lose a portion of their investment or expected return.” In defining the term, the website “Investorwords.com” specifically includes: “changes in a country’s…tax laws” as one of the major risks to be aware of.
It almost doesn’t matter whether the House, Senate or some other punitive proposal makes it into law. By any definition, the perceived political risk of doing business in the United States financial sector just got a lot bigger.
Increased political risk is costly in any circumstance, but it’s particularly costly when it rises at precisely the same time as Treasury Secretary Geithner is about to announce the government’s “public-private partnership” plan to finally address the toxic assets that continue to plague our financial system. For a plan that is expected to rely heavily on the participation of private investors, this politically motivated bonus tax plan sends exactly the wrong message at exactly the wrong time.
It’s not even the specifics of the bonus tax proposal that are the issue. Rather, it’s the heightened risk that the US government, responding to popular outrage in this time of economic crisis, may rush through laws that could materially change the rules under which an investment was made. Possibly even after the fact.
I strongly suspect that even investments wholly unrelated to the financial sector, TARP and the US government are likely to be negatively impacted by this increase in perceived political risk. For those funds considering participation in the Treasury plan, this past week’s legislative reaction is likely to be an off-putting development.
The terms of the Geithner plan, expected to be released shortly, emphasize that the key to its success will depend on the willingness of private equity and hedge funds to put capital at risk by taking toxic assets off the balance sheets of the banks and onto their own, in the hope that they will profit from them over time.
Unfortunately, it is precisely these private funds that are likely to be most worried about the risk of future government action that could cap the potential returns they are being tempted by to get them into the scheme in the first place.
If private capital deems participation in a US government plan too fraught with ex-post-facto political risk, they will either pay less for the assets – or they may simply stay away. That spells bad news for everyone. Secretary Geithner’s credibility is already being called into question by the press and some lawmakers. If private investors balk at participating in this latest version of the rescue plan, what’s left of his credibility could be destroyed.
All of this spells bad news not just for the banks and the bankers. It is also a problem for the US and its leadership in global finance. The existence of alternative financial centers outside of the US means that punitive Congressional action that penalizes the entire financial sector here, may make it more likely that, once the dust clears on the financial crisis, investment and financial leadership could migrate to other locales.
AIG bonuses were an act of consummate political tone-deafness. Some in finance appear to have lost the plot and haven’t yet recognized that taxpayers deserve to be thanked profusely for having bailed them out, just as they were about to crash and burn. Instead, the taxpayer has been given a smug smirk and the back of the hand. Instead of contrition, we have shameless greed. The current pitchfork backlash is, in this case, completely understandable and predictable.
But, if US politicians respond not by taking a sober and level-headed approach, but rather by joining the angry mob in a race to populist over-reaction, then the damage to our unique status as the world’s premier financial center and least politically risky investment destination could be called into question.
— Anonymous

10 comments on “The Unintended Consequences of Taxing Bonuses: Increased US Political Risk”