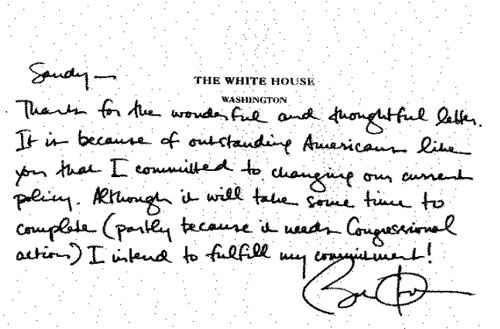 Second Lietenant Sandy Tsao is being discharged from the military for informing her chain of command that she is gay. She wrote in a letter to President Obama that she could not live according to one of the “seven army values” of personal integrity and not be truthful about the issue — even though a legal provision of the military, passed by Congress, and signed by President Clinton promotes and protects a safer choice for gay military staff: duplicity.
Remarkably, Sandy Tsao received the letter from Obama above.
Handwritten, Barack Obama’s letter reads:

Sandy – Thanks for the wonderful and thoughtful letter. It is because of outstanding Americans like you that I committed to changing our current policy. Although it will take some time to complete (partly because it needs Congressional action) I intend to fulfill my commitment. — Barack Obama

Obama’s administration has been silent on the expansion of same sex marriage — and his White House team has in an Orwellian, image-shifting way softened the language on the president’s website about Don’t Ask Don’t Tell. The Rick Warren inaugural invocation still rankles.
But we have the private letter to Sandy Tsao — who despite Barack Obama’s own views is about to lose her job. Dan Choi is too.
I hope that David Geffen gets on the phone to the President and to Rahm Emanuel and tells them that this is not an issue that they can leave way back in the White House closet.
— Steve Clemons