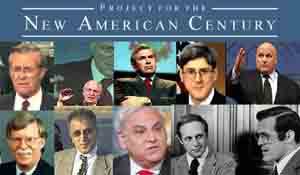 The debate over McCain’s 100 years comment is still pinging around in my brain. Here is my first interpretation of McCain’s intended meaning when I wrote earlier this week:

More important is what McCain actually did mean: that the U.S. should maintain a military presence in Iraq not only as long as it takes to end hostilities, but long after hostilities have ended. Iraq will not be anything like Japan, Germany or South Korea in the foreseeable future. Given the events of the past five years, the Iraqi population simply will not tolerate a permanent U.S. military presence, especially if large-scale violence has ended. McCain is seeing things through a 20th century prism that minimizes the costs and sometimes destabilizing effects of projecting U.S. military power around the world.

I’ll now go a step farther and make a connection I should have made earlier: McCain is trying to rescue the neoconservative project. He is still clinging to the idea — despite all evidence to the contrary — that U.S. military force can fundamentally transform Iraq and the Middle East.
If Democrats and moderate Republicans try to loop these comments into the tactical-level redeployment debate — tempting as that may be, since it’s become a politically safe space — they would be backing down from a hugely important ideological confrontation. Clinton, Obama and their allies need to take this argument at face value and shoot it down. Otherwise, McCain just might be able to bring neoconservatism back from the dead.
— Scott Paul

The Logic and the Costs Behind Clinton’s Gas Tax Proposal
Reid and Biden: Law of the Sea is There for the Taking