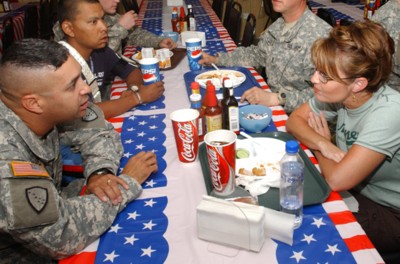 Heck, I stopped in Bucharest, Romania for refueling in the middle of the night. I was traveling with former Treasury Secretary and Senator Lloyd Bentsen, for Secretary of State Alexander Haig, United Technologies Chairman & CEO George David and others.
At 3 am, on hopped for a few minutes Romania’s Minister of Transportation who was the brother of the guy who owned the plane we were on. He handed us a package about Romania’s financial institutions and other good investments for us to consider and took off in a fleet of cars that sped across the tarmac.
I will count Bucharest on my Facebook “Where I have been” account (I did walk off the plane and stood on the runway) — but Sarah Palin is getting some heat after saying she had been to Ireland event though she was there just to refuel.
The bigger issue that does matter is that the McCain/Palin team has been saying that she went to Iraq during her trip to see Alaska National Guard troops, but now are revising to say she did not go into Iraq. There have now been multiple revisions to the official record.
Anne Kornblut posted this response from the Obama campaign:

“The McCain campaign said Governor Palin opposed the Bridge to Nowhere, but now we know she supported it. They said she didn’t seek earmarks, but now we know she hired a lobbyist to get millions in pork for her town and her state. They said she visited Iraq, but today we learned that she only stopped at the border. Americans are starting to wonder, is there anything the McCain campaign isn’t lying about?”

It was Palin’s first big international trip. Kuwait, Iraq, Qatar, Dubai, Iran. . .they all sound so similar.
We shouldn’t be giving her such a hard time. She was just a little lost and confused.
— Steve Clemons

I Am Proud of Bob Kuttner for Knocking Back Hannity
When Facts Don’t Matter, What Do You Do?

13 comments on “Why Not Count Refueling Stops?”