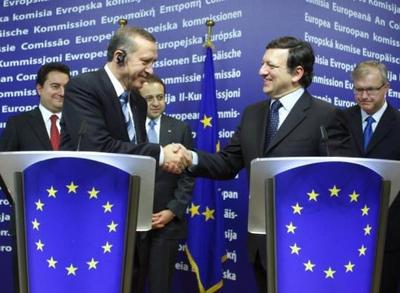 I have a piece up this morning on World Politics Review that advises both Europe and Turkey to exercise patience in their accession negotiations.
From the article:

Ankara is currently enjoying a moment of self-satisfaction. Its economy has fared well in recent years, and it maintains friendly relations with nearly all of its feuding neighbors. Turkey’s potential as an energy hub, its role as a diplomatic interlocutor between its neighbors and the West, and President Barack Obama’s high-profile visit in April have further highlighted Turkey’s emergence as a significant regional power.
But these positive developments have led to an inflated sense of confidence in Ankara. Turkey lives in a dangerous neighborhood in which it has no natural allies. And the deep mistrust between the government and the military, as well as the fact that Turkey’s economy contracted 13.8 percent in the first quarter, reveal that both Turkey’s political and economic systems rest on shaky foundations. In 10 or 20 years, those foundations are likely to be much sturdier should Turkey remain committed to the accession process. And Ankara is likely to find itself in a stronger international position if it enjoys the security and stability that Europe provides.
Things may look different from Europe’s perspective in a decade or two as well. Europe’s population is declining, and economic growth among the developed, Western European states is likely to be low. Turkey will be in a position to provide the labor that Europe needs, while serving as a destination for investment and an engine for economic growth.
But the benefits that Turkey offers Europe go beyond economics. Turkey’s army — the second-largest in NATO — could play an increasingly significant role as the United States gradually pulls back from its overseas security commitments, at the same time that European governments struggle to modernize their militaries while providing for aging populations. Incorporating a Muslim country may also help Europe to integrate its large and growing Muslim minority.
Most importantly, Europe will have to engage with Turkey as a large, influential country on its borders whether or not it becomes part of Europe. The accession process offers Europe the opportunity to ensure that its southern neighbor is as stable, prosperous, and friendly as possible.
So the challenge for Ankara, Brussels and European capitals is to get Turkey to a place where it is prepared to join the Union, even if continuing the accession negotiations until Turkey is actually ready is a difficult diplomatic and political dance.

You can read the entire article here.
— Ben Katcher