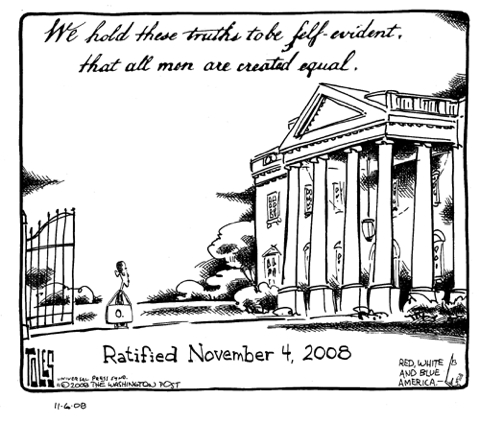 Toles (c) 2009 The Washington Post. Used by permission of Universal Press Syndicate. All rights reserved.
I think it’s our responsibility as American citizens to critique and applaud government’s moves as we see fit. I try to do my part at The Washington Note with words, with video, with meetings, and yes — even in my policy chatter at DC’s more fun cocktail parties.
And Tom Toles does it with drawings — and his band Suspicious Package.
Barack Obama may get a lot wrong in these coming years — but I still think America got something quite right in electing him.
This is a powerful cartoon — and I just noticed that folks can order it if they like here, in all different sizes and at quite reasonable prices. (And if you want an original limited edition with Tom Toles’ signature on it, here’s the higher priced version.)
— Steve Clemons