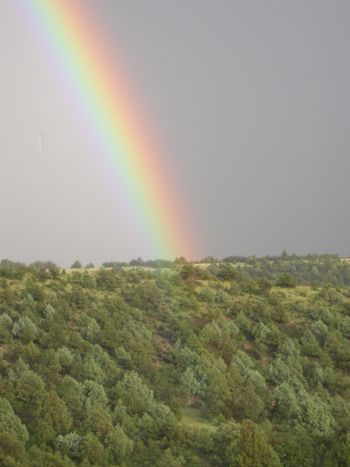 A good friend and neighbor in Colorado just sent this in to me. I happen to own the hill and ridge pictured — and plan someday to have a house there, just about where the rainbow hits land.
Congrats to Al Franken who is nearly there! And like everyone else, I’m pretty darn impressed with Jenny Sanford on her life perspective.
Now off to Rome, where Cicero more than anyone else laid out what checks and balances rule really involves. Today, the American government has helped promulgate the notion that mobocracies and ballotocracies are democracy — and that’s just wrong.
America has gone so off the rails, to paraphrase George Soros, and is not yet back on the right rails that it needs to get its own democracy in order before pontificating as my colleague Andres Martinez does about promulgating and trying to compel democratic practices elsewhere.
— Steve Clemons

Greetings Senator Franken!
Back to Rome