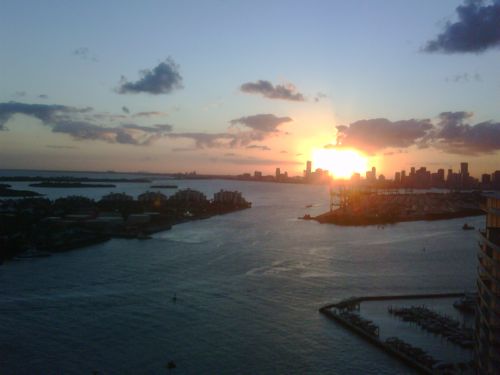 I am in Miami for a couple of days and this beautiful pic was taken from my balcony yesterday evening.
I have been discussing US-Cuba relations with quite a number of Cuban-Americans who live here. I have been telling them about the work that Senator Richard Lugar and his Latin America senior policy advisor Carl Meacham have recently done.
A couple of big surprises. Most want the embargo to end and are indifferent to the political issues that have kept a failed embargo in place for so long.
Secondly, many want to be entrepreneurs in a restarted US-Cuba relationship.
The other nice surprise is that when I put the issue of a relaxation of travel for Cuban-Americans to move back and forth from the US to Cuba, about half of them have the same reaction I do. Why should we create “categories of Americans”? They think we should not be excluding other Americans when legislating about relaxation of travel.
Very surprising — and very refreshing.
— Steve Clemons
Editor’s Note: For the next week, I will be posting intermittently. Probably brief stuff. Others in the TWN network will be adding quite a bit of content as I get recharged on a vacation. I hope all of you have a great week — and encourage you to read TWN, participate in discussion, stand your ground — but stay civil. All the best to all my readers.
— Steve Clemons

11 comments on “The View from My Room: Miami”