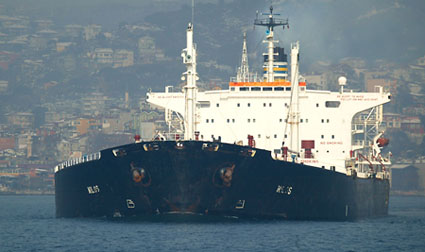 With oil now below $45 a barrel, and Merrill Lynch projecting that it’ll drop to $25 in the next year, I think it’s worth glancing around at those economies that’ll be ravaged if these trend lines continue.
Early in the recent oil spike, the World Bank lauded producer states for taking wiser steps with profits than they had amidst past booms. Namely, using profits to bolster basic macro-economic tenets, like reducing debt and growing other spheres of the economy.
But Russia’s budget for 2009 requires oil to sell at $95 a barrel to break even, Venezuela at $60, Iran between $55 and $60. Many producer states, it seems, have fallen into an old trap, expecting booms to last longer than they actually will. Let it be granted that those forecasts seem modest given the $147 high witnessed last summer.
The most common refrain I’ve heard from energy folks is that an OPEC cut will bring oil up to $60, but not for long. Back down somewhere toward $30 is what most forecast for the early months of 2009.
With US demand down 6.2 percent on the year, and unlikely to rebound, it’s difficult to foresee cartel states balancing books this year.
The most pedestrian conclusion is to believe that struggling domestic spheres will lead to more reckless acts in the international sphere. That Iran and Russia, attempting to turn inner angst against an outer foe, will become all the more boisterous and rogue. But it’s difficult to imagine these states taking more aggressive tacks then those that which they’re already on. I wonder if we might, ironically, see the opposite: domestic aggression combined with a softening toward the international society.
Mahmoud Ahmadinejad, facing elections in June, is in a very tight spot, grappling with 27 percent inflation in addition to the fallout in the oil market. He’s already sacked two major economic officials, and plans to unveil a new economic plan in coming days.
Steps toward a softening with the US would significantly bolster his position, and could yield lifting of some of the restrictions that have crippled the economy.
The New York Times had an interesting piece yesterday on Uralkali, a Russian mining company that’s fighting to avoid hostile takeover by the state. The case looks to be an example of the Kremlin — in concert with Vladamir Putin’s view that the nation was remiss to privatize natural resources in the 1990’s — searching for new sources of state revenue.
Like with Iran, building a new security status quo with the Obama administration — one that respects Russia’s strengths and eases Russian nervousness over a missile shield — could provide serious domestic capital for Medvedev.
So, might we see something quite counterintuitive? Downturn accompanied by softening? Time will tell.
— Brian Till

15 comments on “The Oil Floor”