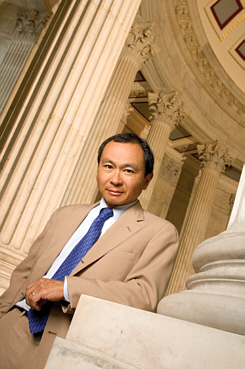 I’m currently sitting in the United Airlines lounge at Washington Dulles Airport — about to fly to Paris. I will be meeting some TWN readers over there.
Coincidentally, Francis Fukuyama is sitting here too — going to the same conference I am. . .and to punctuate that I plan to read his latest blog post, “A New Era,” which I have not read yet.
Here is an interesting section that caught my eye first:

There are three core Reaganite ideas that need to be reformulated or discarded altogether if the United States is to navigate the current crisis and restore its credibility in the new era.
The first has to do with deregulation and the role of the government in the economy more broadly. The Wall Street collapse and the big recession we are heading into occurred for reasons intrinsic to the Reagan model, that is, because the government had permitted the emergence of an enormous, wholly unregulated shadow finance sector under the belief that this sector would be self-correcting.
Financial market liberalization had proven highly dangerous in any number of earlier cases, most notably the Asian economic crisis of 1997-98 and the Swedish banking collapse of the early 1990s, but these warning signs were not heeded and no one imagined that this could happen to the United States itself. In this the Democrats were fully complicit, not just in their support for loan expansion by Fannie Mae and Freddie Mac, but in Clinton Treasury Secretaries who pushed financial market liberalization on the developing world.
The current crisis of course has many other causes, such as the more than $5 trillion of excess savings pouring into the country from China and other Asian countries after 2002, but the idea that history was on the side of ever-expanding deregulation was ultimately an important cause of the collapse.
The Reagan-era joke, “Hi, I’m from the government and I want to help” doesn’t sound so ironic in light of the Fed and Treasury’s heroic efforts to keep the economy from walking further off a cliff.

We Need a Realist, Empathetic Foreign Policy
The Oil Floor