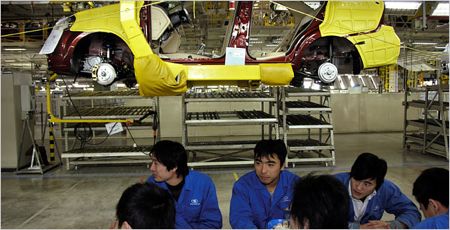 (photo credit: Lou Linwei for The New York Times)
The U.S. government is about to kick $15 billion over to the U.S. auto industry. And what we have seen with all of the bailout cases thus far — from AIG to Citibank — is that that amount is probably just a down payment on a future bigger draw.
Michael Moore has compellingly argued that the best way to save the American auto industry is to force it to choke on its mistakes and bad management — and change. In a public letter, Moore has offered the shocking truth that anyone could buy the entire American auto industry for less than $3 billion — and U.S. taxpayers are about to pump 5 times that into the uncompetitive sector.
And on top of that — there is NOTHING in the current outlines of the auto bailout package that requires the auto industry to keep jobs in the U.S. This money can go to help them manage their facilities abroad — in lower wage countries — while facilities continue to shut down in the U.S. with jobs shifted overseas.
In fact, despite some minor verbal, non-binding assurances from the auto chiefs that American taxpayer funds would not be applied to offshoring activities, there are no deals, no guarantees at all — and if faced with a much higher, less efficient production base in the U.S. compared to cheaper platforms elsewhere — this bailout money could in fact be financing a new major offshoring trend.
Even Paul Krugman alluded to this in his Stockholm remarks accepting his Nobel Prize, suggesting that gravitational forces are going to unwind Detroit’s auto sector, no matter what Obama does. He said “the concentration of the industry around Detroit would disappear.”
Obama’s pre-government team in collaboration with Bush’s outgoing economic officials are trying to diminish the sense of crisis in key sectors in the economy by guaranteeing loans and promising huge cash infusions. . .but, there are ‘smart’ ways to help move industry in new directions and then there is dumb spending.
Not dealing with the question of a new “social contract” inside the U.S. when taxpayer dollars are being pumped into the auto sector is a major mistake.
— Steve Clemons

14 comments on “Offshoring and the Auto Industry”