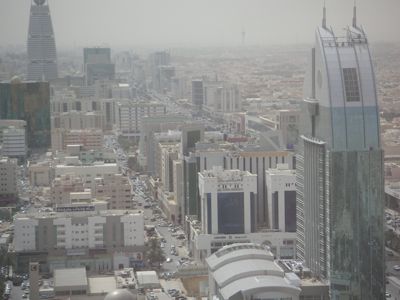 Just arrived in Riyadh. This is the view from my window at my hotel — an overcast day.
Things start up at 12:30 pm, two hours from now on Sunday here. Traveling with me are New America Foundation colleagues and friends Tim Golden who has been a senior correspondent for the New York Times on leave now to do a book, Nicholas Schmidle who just joined my American Strategy Program group along with Tim Golden at the New America Foundation, Flynt Leverett who directs New America’s Geopolitics of Energy Initiative, New America Foundation Senior Fellow and BloggingHeads creator Robert Wright, and one of my director’s council members Richard Vague, who wrote the monograph Terrorism: A Brief for Americans.
More later — need sleep.
— Steve Clemons

Thou Shalt Not. . .Charlton Heston Dead at 84
Room 871 and Generic DC Hubris