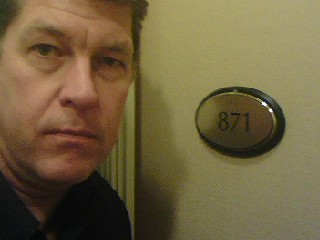 I am sitting at JFK Airport preparing to depart for Saudi Arabia in a couple of hours — and thought I’d post this picture I took of myself last week, standing next to Room 871 of the Mayflower Hotel — the grand establishment where Aldrich Ames took his first $50,000 from the Soviets launching his notorious spying career.
Room 871 was the rendezvous point for New York Governor Eliot Spitzer when he last met a hired playmate.
For some reason, while I really am not that animated one way or the other by the Spitzer sex scandal, the room itself represents to me ‘hubris’.
It reflects how I feel about Hillary Clinton’s Bosnia sniper story — or Barack Obama’s claims that he will stop climate change, end American dependence on foreign oil. Room 871 reminds me of John McCain’s walk through an Iraqi marketplace in a flak jacket and several squads of protective sniper and police forces. It reminds me of the Clinton’s $109 million take in eight years — and Hillary’s feigned surprise yesterday that her husband really could make money when he left public service. The room reminds of Obama getting a stage and sound crew to produce a tape — with echo effects and all — re-creating his October 2002 opposition to the Iraq War.
I think Barack Obama is going to win the Democratic primary in the end, but none of these folks deserves an easy win. I think it’s going to be a close race between McCain and the Dem nominee that is punctuated by bubbles of overstatement, hyperbole, just going too far with gravity-defying platitudes and rhetoric, and then busts when reality punctures the silliness.
More later — but I wanted to let DC visitors know that anyone can go up to the 8th Floor of the Mayflower at this point and snap a quick shot next to a symbol of political hubris.
— Steve Clemons

Riyadh: The View from My Window
Saudi Arabia Next