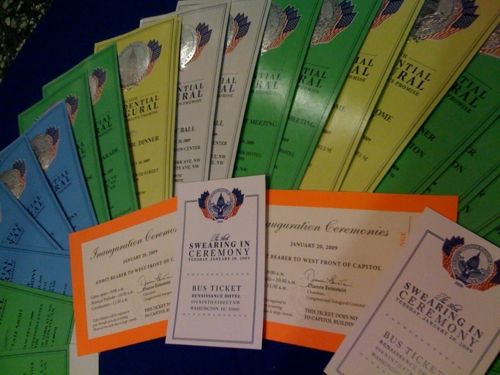 Well, I have made it through every corner of my schedule so far. And last night, we actually added an event — a drop by at the “Late Night Finance Committee Party” of the Presidential Inauguration Committee at the DC Convention Center. Lots of folks there — but the British Ambassador and David Brock’s Media Matters parties were both the best in town last night. And Lori Wallach’s salsa party was hot too. 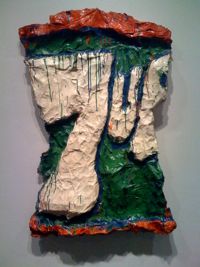 >A friend of mine had his pocket packed with the hard to get invites for all of the official events in town. The most coveted thing he had was a VIP bus pass. At least for the next day or two, a pocket full of tickets like that above translates as “Obama Power.”
Some of the folks who I ran into at British Ambassador to the US Nigel Sheinwald‘s fete on behalf of the “Illinois delegation” included incoming White House Counsel Gregory Craig, Attorney General next Eric Holder, Nobel Laureate and Energy Secretary next Steven Chu, Arianna Huffington and sister Agapi Stassinopoulos, Independent Washington correspondent Rupert Cornwell, Guardian Bureau Chief Ewen MacAskill, CBO Director to be Peter Orszag, Sidney and Jackie Blumenthal, Ken Duberstein, Paul Brownell of Dell and his wife Selina Jackson of UPS, Judy Woodruff, Margaret Carlson, Tammy Haddad, David Broder — and of course, a lot of folks from Chicago.
And then at the Hirshhorn, David Brock on behalf of Media Matters for America pulled i an interesting crowd including long time Hillary adviser Ann Lewis, her brother Barney Frank and his boyfriend Jim, producer and activist Norman Lear, Media Matters spear-carriers Karl Frisch and Ari Rabin-Havt, Lara Bergthold, Heidi Crebo-Rediker and Doug Rediker, Susan Eisenhower, and of course — some of the best modern art in the nation.
After 12 pm tomorrow afternoon, Monday, my twitter feeds will be appearing on a special Huffington Post front page Inaugural feed.
Best news so far about the inauguration — yesterday it was 12 degrees and today 34 degrees. Yeah!
More soon — off to see economist Jamie Galbraith now.
— Steve Clemons