Last night, through a massive crowd of people that David Brock and Media Matters for America assembled for an excellent Inaugural celebration at the Hirshhorn Museum, I thought I saw Norman Lear. And a tear came to my eye. 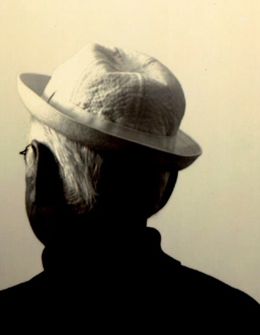 I haven’t seen Norman in a number of years — but he was one of the founding funders of the New America Foundation, a think tank that I helped build and which is committed to pragmatic, solutions oriented policy work. Lear has started so many things — of course, People for the American Way as well as the Norman Lear Center at the USC Annenberg School of Communications run by my pal and fellow Huffington Post scribe Marty Kaplan. And of course, he is the iconic television producer of such shows as All in the Family, Maude, Sanford and Son, The Jeffersons, One Day at a Time, Good Times, and Mary Hartman, Mary Hartman.
His overflowing life and bio are here — but what he is mostly is a flamboyant American patriot who really loves this country — and as a liberal, a hard-headed, never give up never surrender liberal, Norman Lear has never forfeited the flag, or patriotism, or his very public love of country.
I’m not good with emotion. Once I get emotional — too often, a flood of tears come out. I tend to stay far away from the spirtual, the warm and fuzzy, anything that might tweak a real emotional nerve — particularly in public.
I’ll never forget when up at a home once owned by Robert Frost and now lovingly cared for and owned by Lear called “The Gully”, Lear allowed me to organize a retreat of a broad cross section of policy intellectuals. After the first day of proceedings, Norman had all of us hold hands around a table and to think about what we could do to restore the health and welfare of this country. 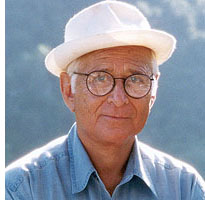 I was gasping for air when we did this. I didn’t like holding hands. I looked desperately around the circle at folks like James Steinberg who will soon be Deputy Secretary of State, and the home-schooled wunderkind Jedediah Purdy, and “public commons” crusader David Bollier, Sun Microsystems and futurist whistle blower Bill Joy, and budget and finance expert Maya MacGuineas — and I could tell that all of them had no problem mixing a spiritual, personal, sensitive moment with their policy deliberations. USC Lear Center Director Marty Kaplan was there and I could tell he was a pro at this emotional stuff, and loving it.
But I couldn’t do it. . .yet.
I protested a little — and I said something along the lines that our future in America required more than hand-holding….and Norman Lear looked at me, smiled, and said “Steve, I want you to come hold my hand. It starts here — we can have a tough discussion on policy, but we’re going to hold hands and think about where the Almighty might be in all of this. . .This is what our country needs and then you can think your big thoughts. . .” and yadda yadda yadda.
It was one of those moments I’ll never forget — and it made me a bit more human.
I owe Norman Lear more than just being one of the three primary funders of the organization that now employs me and houses my ambitions for improving the policy decisions in the country — but I owe him for helping me shed some of the more severe and less humanistic parts of my approach to this town and what we are all trying to achieve here.
In fact, I think that my decision to finally start this blog after two years of nudging by Josh Marshall had a lot to do with my encounters with and discussions with Norman Lear. 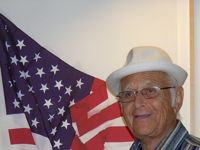 Norman Lear — fully consistent with the kind of American patriot he is — asked Keith Carradine to write a song for him called “Born Again American” to reflect a revitalization of the faith of all Americans in their country, not just those lucky enough to know Dick Cheney or to have been lifelong GOP members.
I’m still someone who is suspicious of overly emotional tributes and know that beneath the parties in Washington and the flag-waving for the ascension of a knew and very different kind of President than we have had before in Barack Obama there is screaming economy and hardship and pain at home and abroad that is always on my mind.
But one of the things I have learned from Norman Lear when jousting with John Bolton, Dick Cheney, and America’s cadre of pugnacious nationalists in the struggle to get American foreign policy back on track is that I never forfeit my patriotism and I’m never shy of embracing the American flag and reminding people what it should stand for.
Thank you Norman Lear.
And thank you to those performers from all walks of life and from all over the country who performed in the video:
Keith Carradine’s “Born Again American” — produced by Norman Lear
Keith Carradine — Los Angeles, California;
Jim Dalton — Jefferson Memorial, Washington, DC;
Chad Van Rys, US Marine — Independence Hall, Philadelphia, Pennsylvania;
Kevin Moore II — Venice Beach, California;
Xiao-Dan Zheng — San Francisco, California;
Matt Thompson — Chicago, Illinois;
Luke Buckett — Echo Park, Los Angeles, California;
Bobby Broom — Chicago, Illinois;
Keith Sanchez — Austin, Texas;
Erin Dzierwa — St. Louis, Missouri;
The Harlem Gospel Choir — Harlem, New York City, New York;
All Saints Episcopal — Rose Bowl, Pasadena, California;
Mu’azzin Benyoucef — Islamic Center (filmed at Mount Rushmore, South Dakota);
Cantor Patty Linsky — Temple Ahavat Shalom (filmed at Mount Rushmore, South Dakota);
David Hernandez — Red Rocks, Colorado;
Tarrah Reynolds — Brooklyn, New York;
Rev. Timothy McDonald III — New Orleans, Louisiana;
Rev. Davidson Loehr — Austin, Texas
Take some time and listen to Norman’s newly produced tribute to the nation in the time of Barack Obama and Joe Biden that will be performed tonight in Washington, DC.
— Steve Clemons